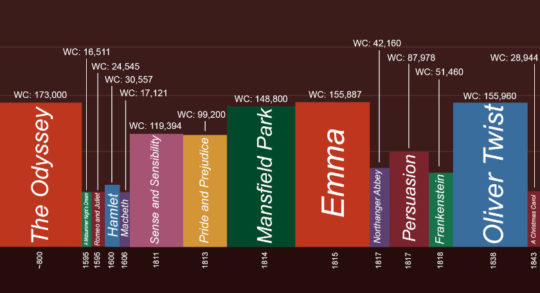 The Visual Communication Guy has released an infographic with word count and time to read of the 50 famous literary classics.

In times when the time is the most important factor in deciding whether you’ll read a book or not, information how long would it take to finish it becomes almost as important.

Our favorite blog on data visualization, The Visual Communication Guy, has just released a new infographic that measures books by words and hours.

Designed by Alisa Scott, the visual collects data about how much time it takes to finish reading 50 of the most famous classic novels.

Each book comes with info about word count (abbreviated to “WC”) and time to read. The latter is calculated taking 300 words per minute as an average reading speed. You can check out the approximate reading time on the vertical axis. Under each book, you will also learn a date of the first publication.

As you will see, as much as 44 titles can be read until 10 hours each. The longest book on the bookshelf is Les Misérables by Victor Hugo. It has over 530 thousand words, and it will take almost 30 hours to finish it.

The second-longest novel is Gone with the Wind by Margaret Mitchell, followed by Alexandre Dumas’ The Count of Monte Cristo.

Curtis Newbold, the founder of The Visual Communication Guy, created some of the most creative visuals related to reading and languages. You have to check out at least these two ones:

Click or tap the infographic to see all details. 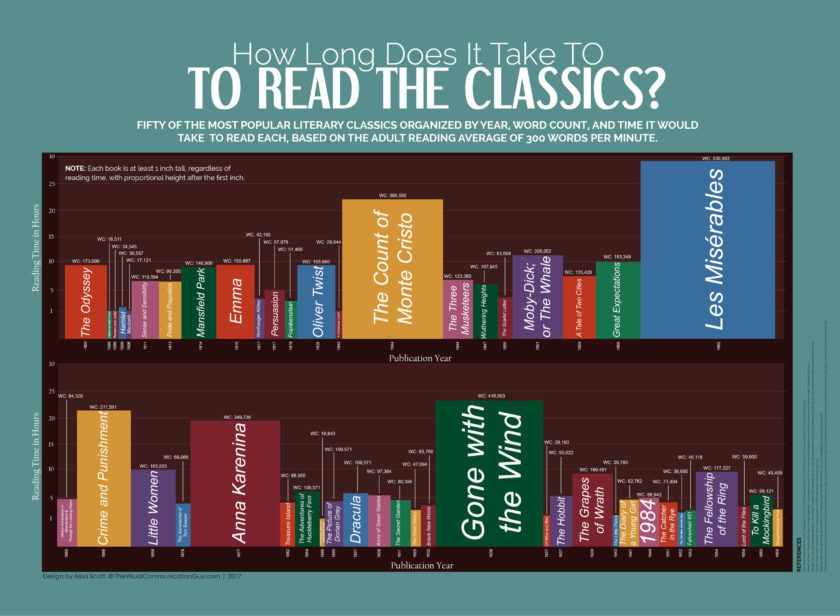 Keep exploring. Here are more infographics about books and reading:

50 literary classics and how long it takes to read them (infographic) https://ebookfriendly.com/how-long-read-literary-classics-infographic/ via @ebookfriendly