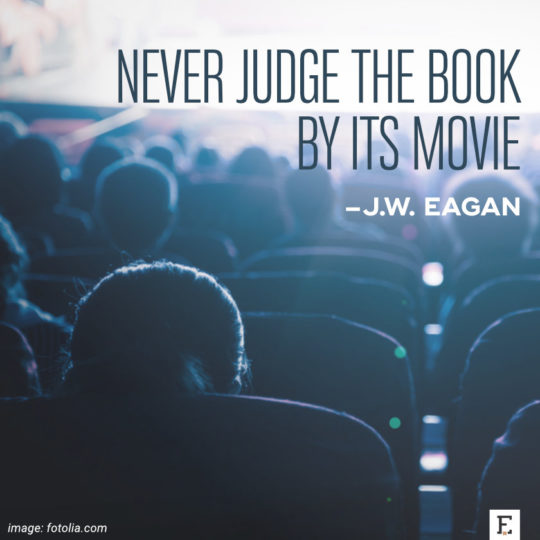 “Never judge the book by its movie” is one of the most popular book quotes on the web. Do you know its author?

She or he must be a writer. Or maybe a literary critic. A screenwriter? Hollywood-based reporter? A charismatic lecturer or passionate librarian?

Sorry, the web, including Google and Wikipedia, doesn’t know this clever person.

It’s interesting that one of the most quoted persons on the Internet is so astonishingly anonymous. The quote is shared hundreds of times each day on social media. It’s being reused on posters, t-shirts, mugs, and on an endless number of quote pictures.

Millions of people imagine J.W. Eagan, but no one (including me – later in a post you’ll read my guess, not proof) knows how she/he looks like.

When you search for “J.W. Eagan” using Google image search, first face you’ll see looks like this is the guy – intelligent, thoughtful, most likely the author. 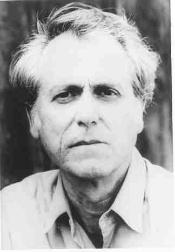 When you want to find J.W. Eagan, a portrait of Don DeLillo appears in Google web image search

The picture shows Don DeLillo, an American novelist and short story writer. Google associates this picture with Mr Eagan (“Mr” could stand for “mysterious” in this case) because the quote appears at the bottom of the same page.

I bet many people ended up here, quite pleased they found a confirmation of their inkling J.W. Eagan is an important author about whom by some strange coincidence they haven’t heard about.

Based on my Google research, the probable answer to J.W. Eagan mystery, is that this is (or was) someone with initials J.W., living in Eagan city, Minnesota.

Filtering Google search results by the time allowed me to analyze how the quote was spreading across the web. It started to conquer the internet in 2007.

Most interestingly, the first appearance of the quote dates back to October 1996. It was posted on a website of Shaffe Mohd. Daud, of Institut Perguruan Darulaman, Malaysia, and was a part of a selection of author’s favorite quotes from Reader’s Digest. The post’s date can be seen in view-source mode.

So, the issue of Reader’s Digest from April 1992 was the essential part of making this quote famous. On page 42, there is an editorial column “Notes From All Over”, quoting The New Dictionary of Thought, originally compiled by Tryon Edwards, and published by J.G. Ferguson Publishing. 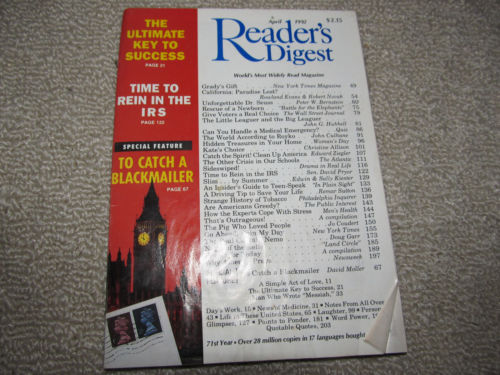 The fact that it involves Reader’s Digest, and the “Notes From All Over” column led me to one of the possible answers.

Many color magazines publish most interesting passages from readers’ letters to the editor. Now, imagine someone from Eagan, Minnesota, writing the quote and sending it to the editor of her/his favorite magazine. The editor likes it, it’s being published as:

Never judge the book by its movie.

Other editors like it as well, and somehow in the editorial process for a magazine or dictionary, the coma is being dropped, most probably being treated as a typo (a typo in the name of such a smart arse, what a shame).

The rest is just spreading the brilliant thought here and there.

Obviously, I’m only guessing, but this possible explanation would prove the conclusion I’d like to make.

What we know about J.W. Eagan is:

Never judge the quote by its author.

Keep exploring. Here are our most popular posts:

Who is J.W. Eagan, the author of one of the most popular book quotes? https://ebookfriendly.com/who-is-j-w-eagan/ via @ebookfriendly