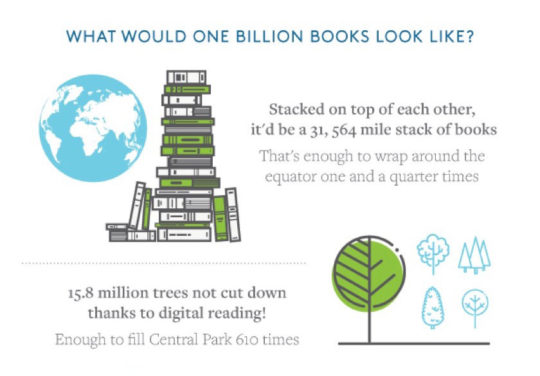 OverDrive is a leading distributor of digital content, serving over 40,000 library and school partners around the world.

The company offers not only ebooks, but also audiobooks, videos, and music, together with an advanced management and fulfillment system.

The next 900 million checkouts from libraries using OverDrive system were like a swoosh.

The creative team from OverDrive has developed an infographic that celebrates the 1 billion milestone – the milestone not only for OverDrive partners but for the entire digital publishing industry. This stunning number should encourage publishers to release more and more of their titles in a digital format and to offer these titles via public libraries.

How would one billion books look like? The stack of books would cross 31 thousand miles. It’s enough to wrap the equator one and a quarter times.

Click or tap the infographic to see it enlarged. Make sure to explore OverDrive services in detail.

Are you interested in infographics about books and reading in the digitage age? Keep exploring: