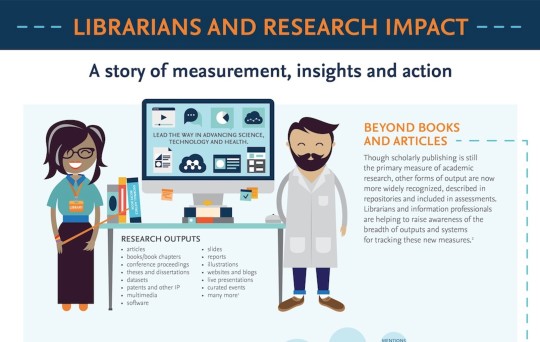 Researching is a hard work. The hardest part is to deal with all the gathered information, and measure all used research values (articles, reports, or dissertations are only few of possible sources).

The more you dig into the research process, the more confused you may get. If things go this way, don’t look farther than the library.

Elsevier’s Library Connect, together with a freelance consultant and librarian Jenny Delasalle, have prepared the infographic, in which you’ll find out how librarians can work with researchers to measure research impact.

Elsevier is an academic publishing company. Their Library Connect program is addressed to academic librarians, and includes free newsletters, webinars, live regional events, and interactive forums among others.

Click on the image below to see it in clutter-free view.

Making a research? Ask a librarian for help (infographic) https://ebookfriendly.com/librarians-research-infographic/ via @ebookfriendly