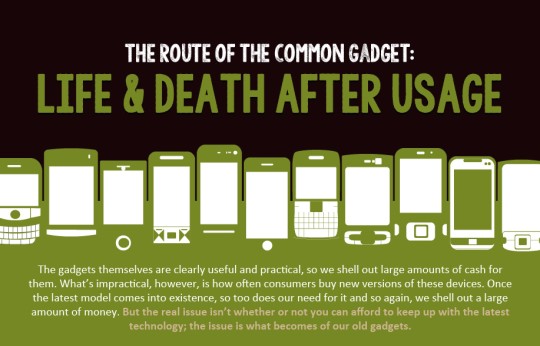 Many users still enjoy their first Kindles or iPads, and the last thing they’d want to think about is what happens to the device when its time is over.

There are also people, like me, who keep old gadgets because of nostalgia. However, we need to realize the time to dispose them will come sooner or later.

The infographic developed by eCycle Best and shared by Inhabitat highlights the importance of proper handling of unwanted or broken gadgets.

The general advice is to try to give your device a second life, find a way to reuse, repair, or recycle it. The other option, shipping it to e-waste centers, “not only has devastating effects on the environment, but can be very harmful to the people dismantling the devices.”

Click or tap on the image to see it in full view.

Other infographics to check out:

How to properly dispose an old e-reader or tablet (infographic) https://ebookfriendly.com/how-to-properly-dispose-an-old-e-reader-or-tablet-infographic/ via @ebookfriendly