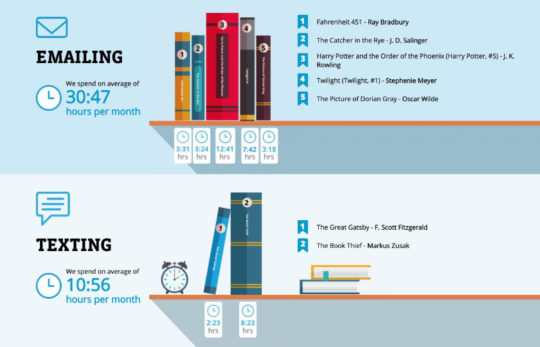 Aren’t you spending a little too much time on your smartphone? Aren’t you reaching for it a bit too often?

Music Magpie, a marketplace for music lovers, has prepared an infographic that shows how much time we spend on the phone monthly – and how many novels we could read instead.

We’re all guilty of spending a little too much time on our smartphones. With just the slightest compromise on your app-trawling habits, you’d be amazed how fast you could get through your book bucket list.

It’s obvious that social media takes the most of the time. In 23 hours devoted to exploring Twitter or Facebook, an average smartphone user could read five novels, including Margaret Atwood’s The Handmaid’s Tale and To Kill a Mockingbird by Harper Lee.

Come on, you can do it. Place a book reading app next to your Twitter or Facebook icon and try to devote 10 minutes a day to reading an ebook instead of going down the social timeline.

10 minutes a day for reading a book could make 5 hours per month! It’s enough to finish J. D. Salinger’s The Catcher in the Rye or The Fault in Our Stars by John Green.

If you, however, think a novel is too long for you, you can try reading short books, for instance, the ones you’ll read in under an hour each.

Make sure to see the original infographic on Music Magpie. Click or tap the infographic to see it enlarged.

How many books could you read in the time you spend on your phone? (infographic) https://ebookfriendly.com/books-read-instead-smartphone-infographic/ via @ebookfriendly