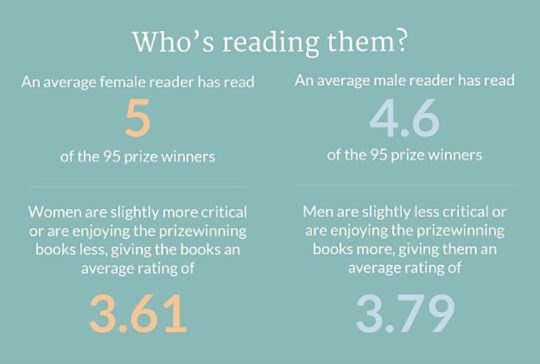 Who writes more prize-winning books: female or male authors? Which kind of narrative is most commonly used? Which of these books are most read, and which most commonly abandoned?

You’ll find the answers in a new infographic created by Goodreads, and entitled Anatomy of a Prize Winner.

The analytics team at Goodreads examined 95 books that won major book prizes between 2000 and 2017. Pulitzer, National Book Awards, and the Man Booker are among awards that were taken into consideration (Nobel Prize in Literature is not on the list, though).

Compared to the infographic that analyzes in detail plots, authors, background, and narrative techniques of the Man Booker Prize winners, the new visual from Goodreads goes one step further and also shows how the award-winning books are being received by readers.

To learn about readers’ preferences, 40 thousand random Goodreads users were selected, of which 50% were female and 50% male. The readers’ activity was analyzed, letting us learn about who was picking up the books, which books were most often read, and which ones were being abandoned.

You will see the infographic below, and before take a look at the most interesting highlights:

Are you interested in infographics and charts about books and reading? Keep exploring: