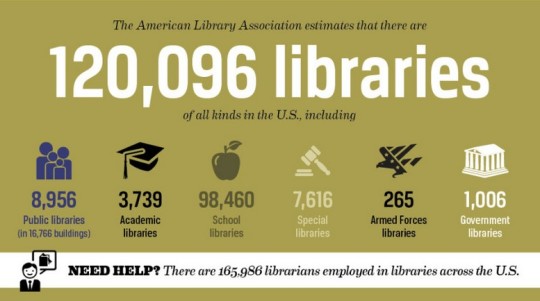 Most important and up-to-date facts about U.S. libraries are now collected in one concise infographic.

The infographic was created by H&R Block, an online tax filing and tax software company. It is full of interesting info about libraries in the United States.

The facts and figures were found on American Library Association or Library of Congress sites, so many people may be familiar with them already.

However, the facts are displayed here in a very concise and to-the-point way. Plus, what I like even more, the creators used meaningful comparisons to provide library figures (McDonald’s and sweets, among others).

These numbers are definitely worth sharing. The most interesting facts are listed below:

A Spanish language version of this wonderful infographic is available at H&R Block Blog.

Click or tap the image below to explore it in full resolution.

Check out recent posts about libraries: