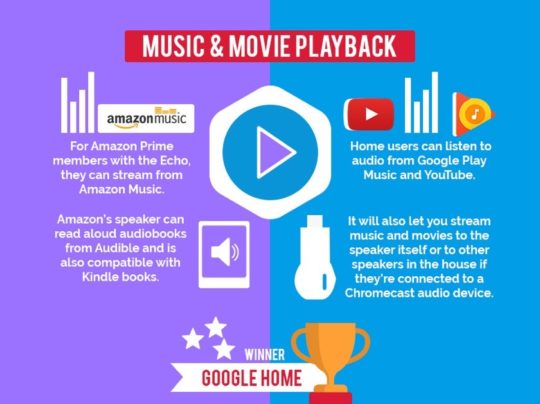 It’s the beginning of 2018, and all major players offer smart speakers, as well as the stuff they can play on them. Google is the last big company to join the audiobook business.

Audiobooks and smart speakers are meant for each other. You can start listening to an audiobook without touching a thing. It’s a voice-only world.

Australian home improvement company Half Price has released an infographic that is an all-in-one comparison of two competing voice assistants and their supporting ecosystems: Amazon Echo and Google Home.

At the end of 2017, Amazon’s voice assistant accounted for almost 70% of the market, but Google Home wins in music playback as well as design. The latter device is also a natural choice for everyone who is using an Android-powered smartphone or tablet.

Are you going to buy a smart speaker in the near future? Which device is on your wishlist?

We’ve got a huge infographic archive. Take a look at the recent ones: