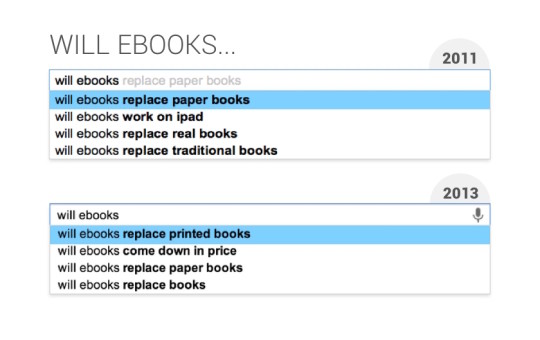 Google web search can be an interesting source of information about how our attitudes towards ebooks change.

Google has one feature that can tell a lot about what’s on our minds, without running an expensive survey or buying social media figures. It’s called Google Instant and most of us use it every day.

Google Instant tries to predict what you’re looking for, and as you type it suggests a few key phrases in a drop down menu. According to Google, it can save between 2 and 5 seconds on every search, but there is one thing much more interesting than that.

Instant autocomplete algorithm relies on popular queries typed by other users. In other words, only most popular queries are displayed in the Google Instant drop-down menu.

Two years ago, in October 2011, I thought it would be interesting to check out which ebook-related topics were bothering web users at that time. Simply, start typing in a Google search box “will ebooks…” and you can get some interesting hints on what people expect from ebooks, or, as you’ll see in the visualization below, they’re afraid of.

I compared Google Instant searches from October 28, 2011 and August 14, 2013. Why? Because what’s even more interesting than checking current status is analyzing the trend.

Two years ago most people were afraid ebooks would replace print books (3 out of 4 instant phrases were about that).

Well, anyone who could expect the fear would be gone until 2013 was wrong. “Will ebooks replace print books” is still the most popular search query. What’s worth highlighting is that now print books are identified as books in general (4th Instant suggestion in 2013).

However, there is a sign of going to left-brain thinking. Now, many people want to know whether prices of ebooks will go down. Clearly, lots of users have made a research and discovered ebooks were not as cheap as they thought.

There is one very interesting results in 2013 which makes me think “why is that?”

“Are ebooks cheaper” or “are ebooks any good” are very reasonable questions you could expect many people to ask, but why “are google ebooks free” appears in 2013?

To me, it has something to do with Google scan book project, 30 millions of books digitized by search giant, “millions of them free”. Google Book Search evolved to Google Books. With the launch of Google ebookstore (now called Google Play Books) in several new countries, it may create a huge confusion – as well as high expectations of free content in Google ebookstore.

A trend worth pointing out is that now more and more students are looking for ways to use ebooks (“are ebooks cheaper than textbooks”).

“Can ebooks be read on kindle” is rather a humorous accident (or maybe it proves Kindle is not a top-of-mind device when it comes to ebook-reading).

Both in 2011 and 2013 people want to print out digital books, and the common fear is that you can’t share the ebook.

The search trend clearly shows there is a growing number of people who seriously consider ebooks as a source of business. “Do ebooks have pictures” have been replaced by “do ebooks make money,” and “do ebooks sell”.

I wish one day adults will have such positive attitude towards ebooks as kids. This research will be done again in two years to see how our emotions related to ebooks evolve.

To me, ebooks will not replace print books, because they will disappear sooner.

You can share this visualization on your blog, simply copy the code below and paste it in html/text view while creating a post.