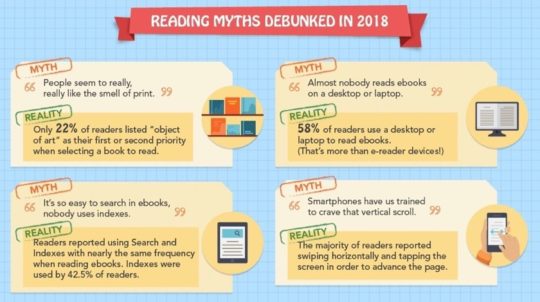 74% of Americans read a book in 2018. Europeans spend €200 per person on books and newspapers. Reading books on mobile phones is surging in Africa.

Following the 2017 edition, the team from Global English Editing has created an epic infographic with detailed facts and stats that help learn about the state of books and reading across the world in 2018.

Every single part of this stunning visual is worth reading and sharing.

The section with reading habits across the world shows how many hours per week people spent reading in particular countries. This ranking doesn’t change for years – the top 3 is occupied by India, Thailand, and China.

India is the only country in the world where on average people were reading more than 10 hours per week.

It’s interesting to observe how reading evolves in Africa. People read here on mobile phones, and the total time spent on reading was 32% longer than in 2017.

The infographic lists also top 20 most popular print books of 2018 :

We’re reading about politics more than ever before too. The most popular print book this year was Fire and Fury: Inside the Trump White House by Michael Wolff, although most European countries preferred Becoming by Michelle Obama.

The state of books and reading in 2018 (infographic) https://ebookfriendly.com/state-of-books-reading-2018-infographic/ via @ebookfriendly