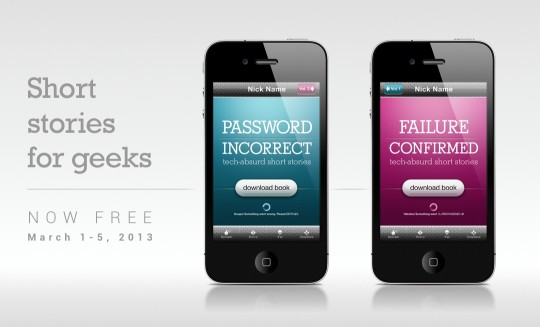 If you are a tech geek and would like to double-check what’s wrong (or good) with your geekish attitude, these fun-to-read stories (written by myself) might be a good companion while restarting the operating system (or operating systems). A hint that may geo-locate these stories on a book-genre map: it’s something between “Monty Python of digital age” and “Vonnegut with ADHD”. It’s how reviewers described the books, not me. I’m much more down-to-earth: don’t expect Nobel-prize level in multi-touch appliance of literature user interface to daily problem solving.

I wrote these tech-absurd stories back in 2007, published on a couple of self-publishing platforms, but really had not time to actively promote them to tech geeks. Recently a friend sent me a DM, saying that she was laughing to death after reading “Wishes Shovel Best”. In fact, some of these crazy ideas I had 6 years ago, have come true. It’s fun to compare the vision with the reality.

Now these two books, Password Incorrect and Failure Confirmed, are free in Kindle Store, until March 5, 2013, Pacific Standard Time. I promise, your e-reader or reading app won’t crash on download. Don’t take bottom-level icons on book covers too seriously (as the other friend of mine did: “I’m not going to download this crap, it contains malware!”).

I’m never good in asking, but I would be extremely grateful for leaving a 1-to-5-star review. Please feel free to share the books with other geeks. Check also the archive of my micro-fiction on Tumblr – it’s an up-to-date commentary to what’s happening in tech life.

Thinks e-books are totally cool, and doesn’t understand why you don’t think so. He would love you to read his books on your mobile phone. Give it a chance in a subway, would you?

iPhone artist. Creates one-picture stories, from a first idea to a first tweet – all on the iPhone.

Lives in Warsaw, Poland, with his wife, two daughters and 62… 63 social media accounts.

A first volume of a tech-fiction short story collection. Designed to be a perfect mobile reading for geeks, who sometimes feel the need to recover from tech-related stress. In a book you’ll find 20 stories, which can help you redefine “absurd” from “being ridiculous” to “being funny”. Bonus: 10 best hashtagstories – author’s original Twitter micro-fiction format.

These stories serve as a reminder.  Issued up from the heart of Poland by a wired writer in translated English making absurd light of situations unimaginable even a decade ago, ones fraught with the danger of banality.  But this nimble writer deftly zigzags to humor and sheer wackiness.  It has been suggested that multimedia “books” could be literature’s future, and that may well be.  But I think more likely candidates are the sort of short stories you’ll find in Password Incorrect, which exploits the networked world’s novelties while remaining true to the universal commonalities of the human experience.
You not likely come across anything quite like Password Incorrect any time soon. Unless this work receives the wide audience it deserves and imitators spring up.
– Court Merrigan

Volume 2 of a geek-fiction collection for mobile readers. All of them proving that life can be exciting even if you’re not taking part in an expedition to North Pole or dying every night at the parties on Ibiza. A full adrenaline is guaranteed if you have a shiny laptop which is about to say: “Fatal error: Call to a member function loadObject() on line 666”.

I love how these stories show an understanding of the nuanced relationship between human beings and technology, which is often belied by the absurdity of the humor. Technology is presented not as a boogey-man, but rather as the tools human beings create to fill real needs.  The problem, of course, arises from humans’ preternatural abilities to epically eff up even the best intentions.
– Moxie Mezcal

Short stories for tech geeks are free on Kindle until March 5 https://ebookfriendly.com/short-stories-for-tech-geeks-are-free-on-kindle-until-march-5/ via @ebookfriendly