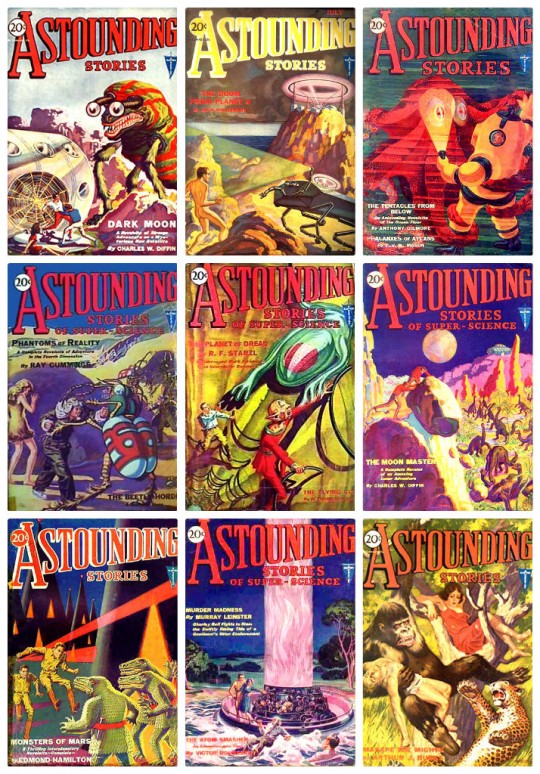 I’m pleased to share a new set of great books that came into public domain and are available for free from Project Gutenberg. Many people assume that public domain is all about classic literature from XIX century. It’s not true. You can find a lot of much younger publications.

Some time ago, I put together 12 great sci-fi titles from 30s, 40s, and 50s, including stories by Philip K Dick. In fact, Project Gutenberg has much more vintage sci-fi publications than that. Astounding Stories of Super-Science are the next great thing to download.

Astounding is the initial name of Analog Science Fiction and Fact, the longest running sci-fi magazine. By many enthusiasts it’s considered the best of its genre. The magazine was launched by William Clayton, a well-respected publisher of several pulp titles. He hired Harry Bates as the editor.

Astounding started as a “Blood-n-Thunder” pulp with an emphasis on action, and damn the science. There are some very good authors contained in these pages like Edmond Hamilton, Murray Leinster, Hugh B. Cave, Arthur J. Burks, and Miles J. Breuer.

In the first two years, Astounding Stories of Super-Science were published in the USA without a copyright notice. That’s why they are available in public domain.

The full list of 20 issues of Astounding, published between January 1930 and August 1931, is available here, and below you can find most popular titles, together with stories included in each volume.

Astounding Stories of Super-Science, May 1930

Here are the most downloaded free ebooks during the pandemic
– June 7, 2020

Over 250 short stories from a popular sci-fi magazine are now free to read and download
– February 11, 2020

Astounding Stories of Super-Science are free on Project Gutenberg https://ebookfriendly.com/astounding-stories-of-super-science-project-gutenberg/ via @ebookfriendly