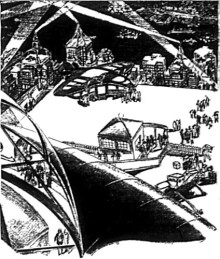 Illustration from Brigands of the Moon, Astounding Stories of Super Science, March 1930

Ray Cummings was an American science-fiction author, one of the founders of sci-fi pulp fiction. He wrote more than 700 short stories and novels.

Before he started to write sci-fi, he was working closely with Thomas Edison, as his personal assistant and technical writer.

In a foreword to Brigands of the Moon, a first part of his four-part novel from Gregg Haljan series, published in Astounding Stories of Super-Science from March 1930, he gave an interesting description of how libraries and books might look like in 2080.

Books may be “printed, or in whatever fashion you care to imagine”. Cummings was not sure whether the New York Public Library would be there or not – he assumed it would.

Librarians would have powers it’s quite brave to imagine even in digital times. The librarian would be able to modify the language of the book in no time, and put “occasional footnotes to help explain some of the things we might not understand.”

The description of the libraries by Ray Cummings would soon land in our list of inspiring sci-fi visions of the book.

Before the excerpt, just a reminder that several issues of Astounding Stories of Super-Science are available for free on Project Gutenberg.

From a foreword to

Brigands of the Moon

(The Book of Gregg Haljan)

[…] Let us imagine it together. Suppose we walk down Fifth Avenue, a pleasant spring morning of May, 2080. Fifth Avenue, no doubt, will be there. I don’t know whether the New York Public Library will be there or not. We’ll assume that it is, and that it has some sort of books, printed, or in whatever fashion you care to imagine.

The young man library attendant is surprised at our curiously antiquated aspect. We look as though we were dressed for some historical costume ball. We talk old-fashioned English, like actors in an historical play of the 1930 period.

But we get the book. The attendant assures us it is a good average story of action and adventure. Nothing remarkable, but he read it himself, and found it interesting.

We thank him and take the book. But we find that the language in which it is written is too strange for comfortable reading. And it names so many extraordinary things so casually! As though we knew all about them, which we certainly do not!

So we take it to the kind-hearted librarian in the language division. He modifies it to old-fashioned English of 1930, and he puts occasional footnotes to help explain some of the things we might not understand. Why he should bother to do this for us I don’t know; but let us assume that he does.

And now we take the book home––in the pneumatic tube, or aerial moving sidewalk, or airship, or whatever it is we take to get home.

And now that we are home, let’s read the book. It ought to be interesting.

Libraries and books of the future as imagined by Ray Cummings in 1930 https://ebookfriendly.com/libraries-books-future-ray-cummings-1930/ via @ebookfriendly