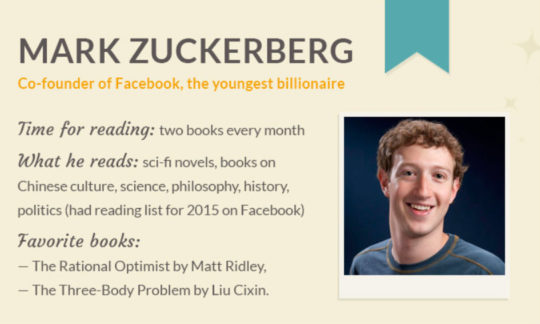 We all know that reading is important for success. Here are some figures to prove it. 88% of wealthy people read at least half an hour a day. The average CEO reads 60 or more books a year.

These, and other facts about reading habits that lead to success, are included in the new infographic from Fresh Essays.

Reading is a powerful tool of self-improvement. It’s one of the richest sources of knowledge and inspiration. The right literature (either fiction or non-fiction) develops creativity, enlightens and entertains.

94% of wealthy people read about current events, but only 11% spend their time reading for entertainment.

The infographic includes also the “reading profiles” of most successful people: what time a day they read, what categories they prefer, and what are their favorite books.

Oprah Winfrey, Steve Jobs, Warren Buffett, and Mark Zuckerberg are among them.