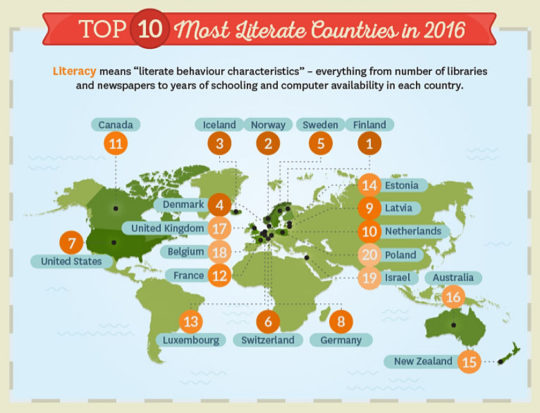 The new infographic puts together stats and facts about reading and publishing that let better catch differences between countries.

An online professional editing and proofreading service Global English Editing has just released a new infographic that focuses on books and reading.

The visual puts together facts and figures from several sources and can be a quick source of information if you are looking for information that compares reading stats in different countries across the globe.

The infographic includes info about which countries read the most, ebooks statistics, global publishing figures, and biggest worldwide bestsellers.

The most interesting, however, is the section that shows the most literate countries in 2016.

“Literate countries” doesn’t mean the ones where people read the most books. The term describes the countries where citizens have the easiest access to libraries, newspapers, and computers.

Literacy means “literate behavior characteristics” – everything from number of libraries and newspapers to years of schooling and computer availability in each country.

Top 5 most literate countries (in 2016), according to the infographic from Global English Editing, are Finland, Norway, Iceland, Denmark, and Sweden.

Want to see more infographics about books, libraries, and reading? Here they are:

A guide to world reading habits (infographic) https://ebookfriendly.com/guide-world-reading-habits-infographic/ via @ebookfriendly