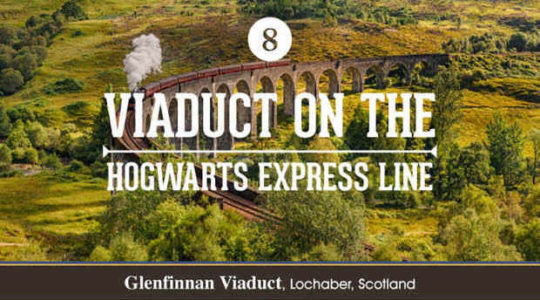 Viaduct on the Hogwarts Express Line was filmed in Lochaber, Scotland

Wouldn’t it be great to spend a day in Hogwarts for real? Or reach the location of Harry and Hermione’s campsite? Or see that picturesque viaduct on the Hogwarts Express Line with your own eyes?

NeoMam Studios have designed for Darwin Escapes a gorgeous infographic that shows locations where Harry Potter movies were filmed.

The fictional world of Harry Potter has filled our mere Muggle lives with magic and awe. We’ve all dreamt of wand testing at Diagon Alley and have travelled the Hogwarts in our imagination, fully suited in Gryffindor robes.

All twelve locations described in the infographic are in the U.K. Plus there is a map with eight Harry Potter locations in London. Doesn’t it sound like an idea for HP holidays?