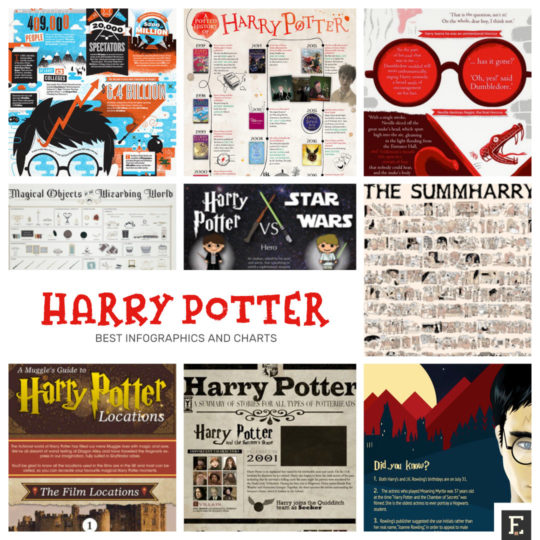 Here are Harry Potter infographics and charts both wizards and muggles will be amazed to explore.

Being a Harry Potter fan means you can recite by heart the names of most characters, or describe in detail what happened in a specific chapter in a specific book from the series.

But are you sure you know absolutely everything about Hogwarts? This list of visuals will let you quickly check this out.

From all over the web we’ve collected the most magical visuals describing the world of Harry Potter.

You’ll find here the infographics with lots of facts and numbers about books and movies – but not only.

Fun charts that refer to sometimes very specific topics are also included. You have to check out the visual that collects all the magical objects from the Harry Potter books. Or the beginner’s guide to Harry Potter wand motions. Or a history of Hogwarts house points.

Click on each image to see it in full resolution. Make sure to check out the credit links to learn more about the featured infographics and charts. 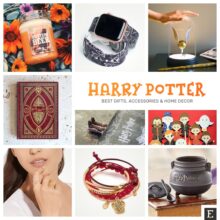 Top article
If you want to keep the Harry Potter magic in your real life, here are the most interesting but rather unusual gifts inspired by the famous book series.

1. Every point given or taken by Hogwarts teachers

This fantastic infographic, released by Pottermore, tracks every award and penalty across the first seven books. It shows the overall number of points given and taken, broken down book by the book; most and least generous teachers; and points received or lost by every student.

2. The battle of Hogwarts

From Pottermore comes a fascinating timeline of the most thrilling of all battles.

“During this fight to end all fights we witnessed the deaths of beloved characters, a long-overdue first kiss, courage in the face of evil and a spectacular final act that no one will ever forget.” 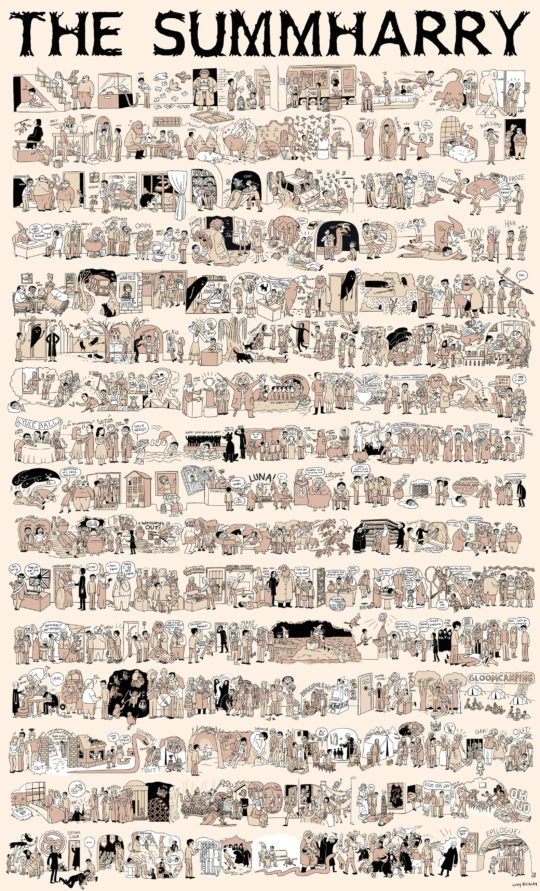 The SummHarry was designed by a comic artist, designer, and book author Lucy Knisley.

This extraordinary chart will guide you through the plot of the entire Harry Potter saga.

If you need a bit more info about each book, you can follow the visual guide that summarizes the first seven films. 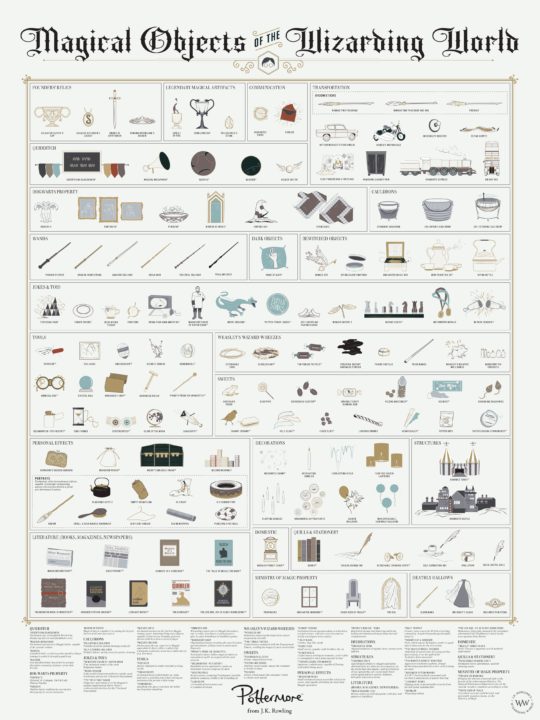 Awesome designers from Pop Chart Lab have created a chart that showcases the top magical object from the Harry Potter world, from the Mirror of Erised to the Sword of Gryffindor. 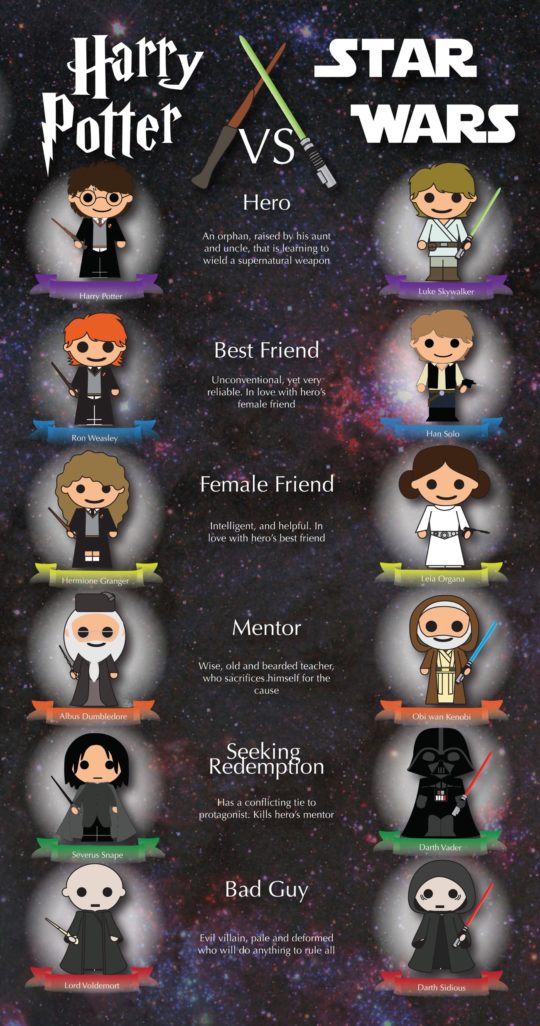 Art director and illustrator Mary Brown has found out that Harry Potter and Star Wars sagas have surprisingly many similarities when it comes to character roles. 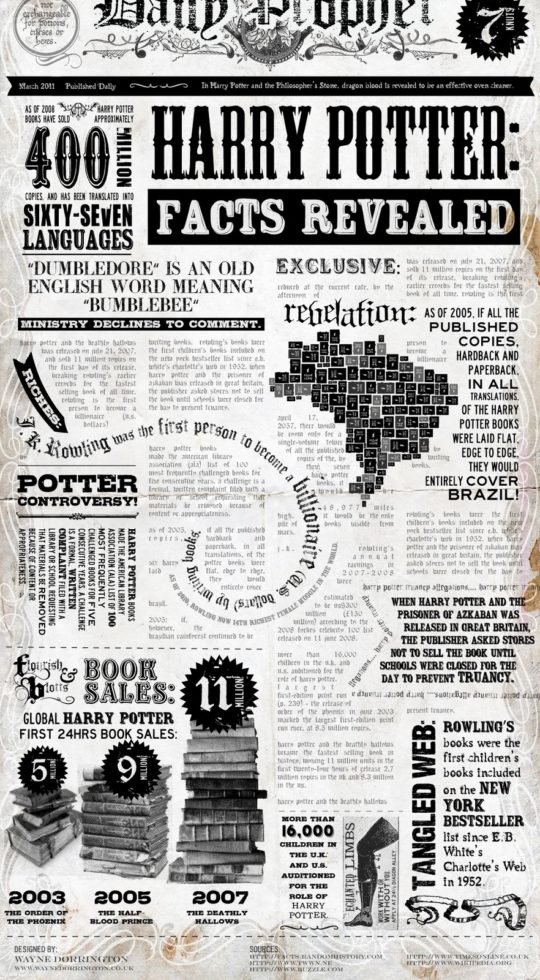 Interesting facts about the books from Harry Potter series were put together in a gorgeous visual designed by Wayne Dorrington.

The infographic shows how Harry Potter has been perceived by the public opinion around the world. It also shows facts and figures about worldwide sales and translations.

8. Harry Potter movies by the numbers

Now it’s time to analyze movie adaptations of the Harry Potter series. The infographic prepared by Cinema Blend was made before the eighth film was released. However, it includes some interesting info, for instance, the comparison of the top-grossing fantasy movies. 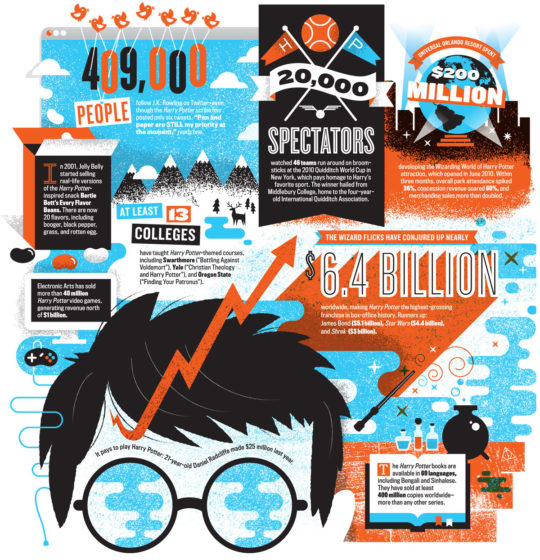 Harry Potter is not only about books and movies. It’s a huge business that includes almost all areas of the entertainment industry.

The infographic designed by Mikey Burton puts together most interesting facts and numbers about J.K. Rowling’s magic empire. 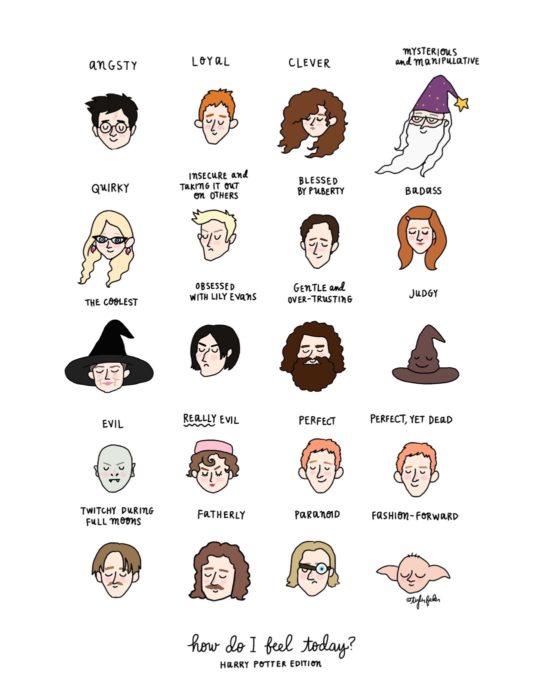 This gorgeous illustration by Tyler Feder lets you pick up how are you feeling today, having Harry Potter characters as a reference.

The image is available as an instant download on Etsy, where you can also get the chart with foods of Harry Potter. 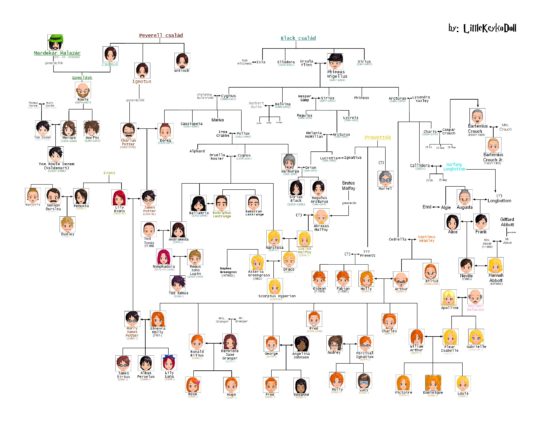 The epic chart that lists Harry Potter characters. Designed by a Hungarian artist Fanni Blazsó, and released on Deviant Art.

Some of the words haven’t been translated into English, but you’ll have no problem in getting their meaning.

Wouldn’t you love to spend a day in Hogwarts? Or reach the location of Harry and Hermione’s campsite?

Now that’s possible, thanks to the infographic that lists locations where Harry Potter movies were filmed. All twelve locations are in the UK. Plus, you’ll find here a map with eight Harry Potter spots in London.

13. The cost of being the ultimate Harry Potter fan

If you are the fan of Harry Potter, you have to be prepared for costs. Have you crossed the spendings listed in the infographic above? 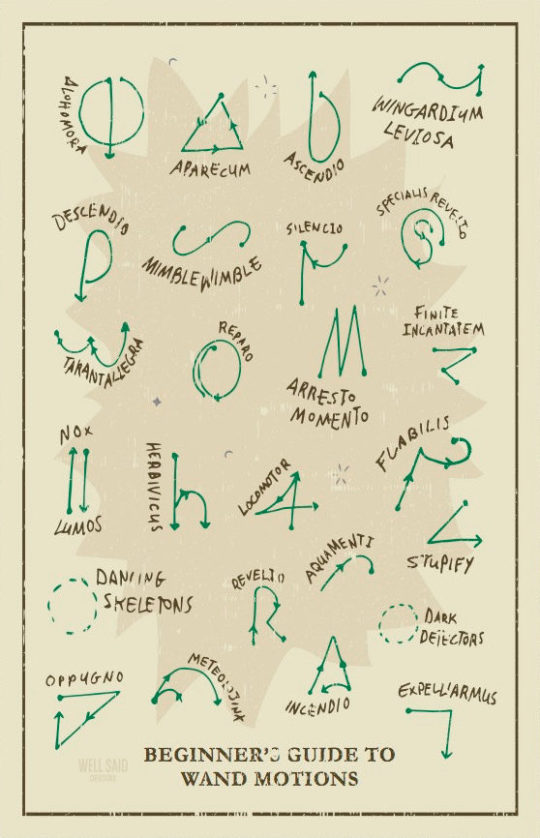 Every witch or wizard (even muggles) need to have the basics in wand motions. Here is a simple chart that will take you through the basics, designed by Leah LaPera. 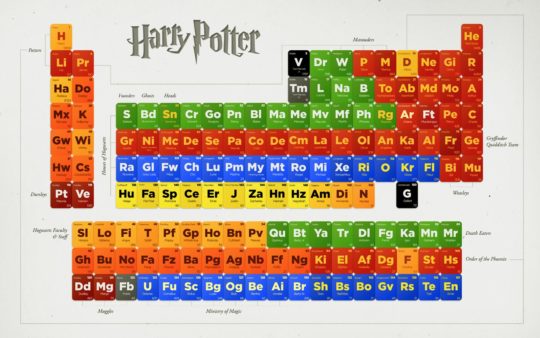 This periodic table focuses on Harry Potter world and lists 117 elements known to wizards. It was designed by Mikhaila Aldaba, a young graphic artist from the Philippines.

The infographic includes stats, numbers and fun facts you might not have known about the movies, books, and characters belonging to Harry Potter universe.

17. Harry Potter spells you ought to know 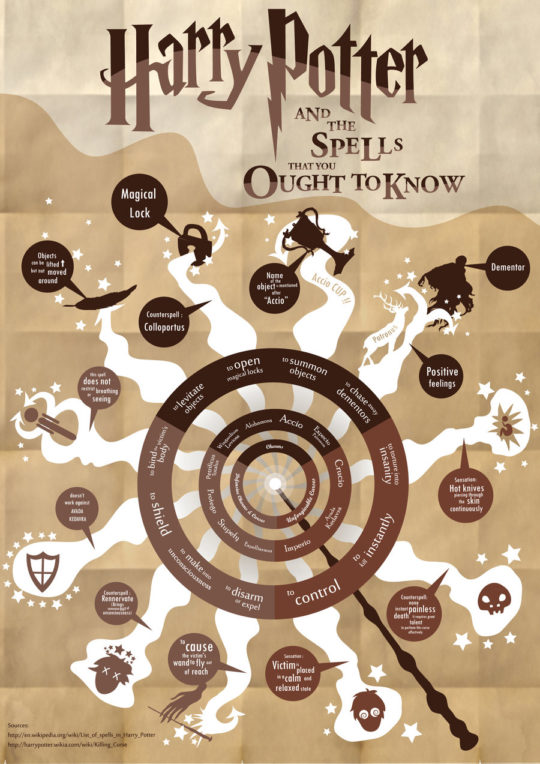 This visual collects the spells from Harry Potter books. It was created by a Malaysian Deviant artist Sean Chun Seian Liew.

18. A history of Hogwarts house points

The infographic tracks every award and penalty across the seven Harry Potter books to bring you the ultimate guide to point-scoring at this school of witchcraft and wizardry.

Wands are the most important props in the books and movies about the wizarding world of Harry Potter.

In the infographic above, you’ll find twenty-seven most incredible Harry Potter wands, from the ones used by Harry Potter or Ron Weasley to Albus Dumbledore, to Lord Voldemort. 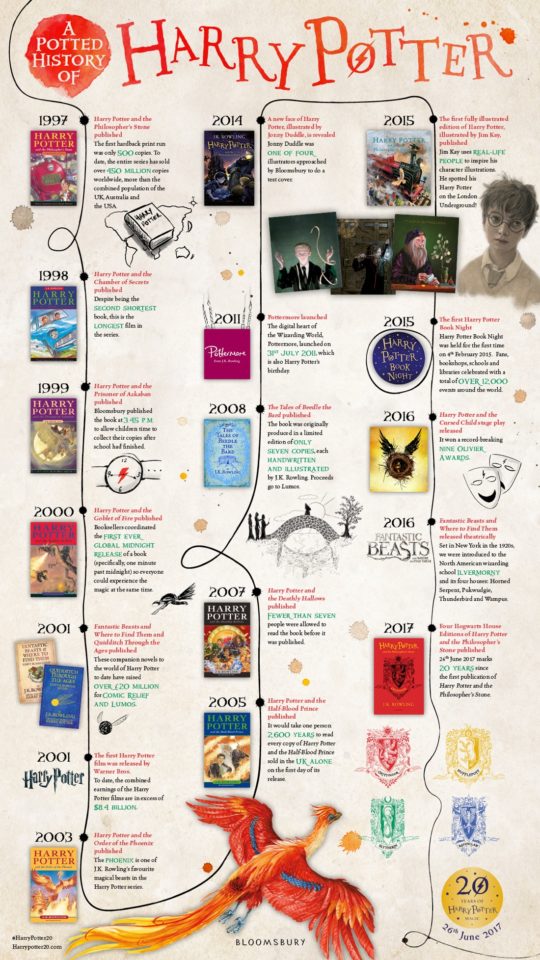 To celebrate the 20th anniversary of Harry Potter, Bloomsbury Publishing has created an interesting timeline that depicts an enormous publishing success of the Hogwarts saga.

Since the release of Harry Potter and the Philosopher’s Stone, the series has sold over 450 million copies worldwide, was translated into 78 languages, and inspired a major movie franchise.