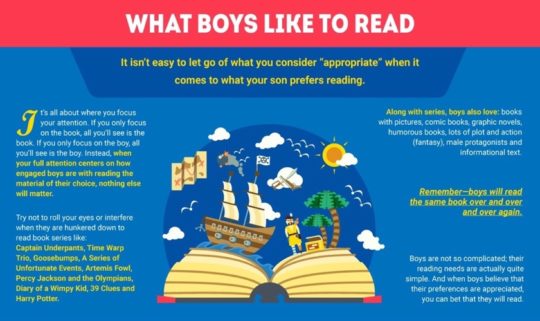 We’ve seen many infographics that share tips on how to involve children and teenagers in reading. Isn’t it, however, important to find out what’s the difference between boys and girls when it comes to reading habits and preferences?

An infographic from Fractus Learning shows that such a split makes a lot of sense.

Entitled Appreriating what, where, and how boys read, the visual contains everything you wanted to know to understand how boys read. Let’s hope the similar infographic about girls will be published soon.

The infographic is based on an article by Hillary Tubin, the author of Boys and Books, a book that shows parents how to encourage their sons to read for pleasure every day.

The infographic is not packed with numbers, but it’s full of insightful thoughts.

You can learn what books boys like to read (picture books, comic books, graphic novels, and fantasy). Where they read is also important (on a floor, against the wall, outside, or using a flashlight).

Remember, it’s not about what boys are reading, where they read or how they read, it’s about their degree of engagement. Appreciating your son’s reading preferences puts him on the path to success because it allows him to develop the daily reading habit.

It’s worth to keep in mind that boys will read the same over and over again. Has your son found such a book already?

Want to explore our archive of infographics about books and reading? Here are the most recent ones:

How to engage boys in reading books (infographic) https://ebookfriendly.com/engage-boys-reading-books-infographic/ via @ebookfriendly