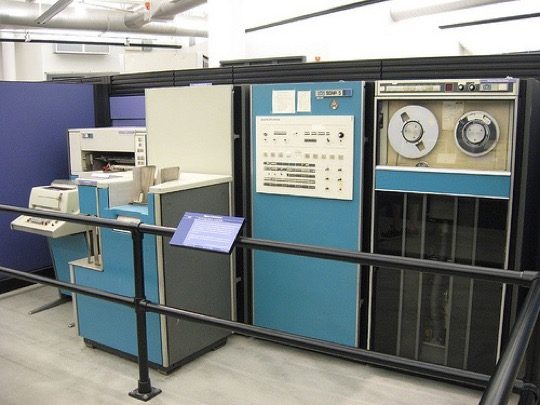 Xerox Sigma V – Michael Hart typed on it the text of the Declaration of Independence / Photo: Edie Bresler

Declaration of Independence, the first ebook in the world, was created by Michael Stern Hart on Xerox Sigma V computer.

In 1971, Michael Stern Hart, passionate technologist and futurist, was given access to the extensive computer time on the Xerox Sigma V mainframe at the University of Illinois.

Hart didn’t want to waste time and started to think of what to do with it. Inspired by a free printed copy of the Declaration of Independence he decided to type the text into the computer.

In an interview in 2002 he explained:

We were just coming up on the American Bicentennial and they put faux parchment historical documents in with the groceries. So, as I fumbled through my backpack for something to eat, I found the US Declaration of Independence and had a lightbulb moment.

He finished the work on July 4, 1971, and made the file available to other users of the computer network, with an annotation that it was free to use and distribute.

It was the beginning of the legendary Project Gutenberg, the first project to make books freely available in digital format.

Most of the books created in the first twenty years Michael Hart typed himself. By 1993 there were 100 books in the Project Gutenberg. Now the catalog offers over 50,000 titles, all in the fashion started by Michael Hart – created voluntarily and free to use by every internet user.

Xerox Sigma V computer was produced by Scientific Data Systems (SDS) in 1967, and cost $300,000. Its initial memory size was 16K. You can see it in real at the Computer History Museum, where it was donated in 2002 by Carnegie Mellon University.

And if you ask what happened to the first ebook in the world – it’s there, Project Gutenberg’s ebook #1, available for download right now: http://www.gutenberg.org/ebooks/1.

On this computer the first ebook in the world was created https://ebookfriendly.com/computer-first-ebook-was-created/ via @ebookfriendly