Latest Pew Internet report is a very comprehensive study about habits of young Americans when it comes to books, reading and libraries.

We shared already one outcome of the report, showing a very promising trend in how teenagers aged 16-17 approach ebooks. The main part of the report is, however, devoted to recognize library habits and preferences of the younger generation of Americans.

Currently, 63% of all Americans ages 16 and older claim they have a library card. Considering in-person visits, 84% of Americans aged 16+ have ever visited a library or bookmobile. Younger people, 16-29, were slightly more eager to visit libraries than the average (86%).

It gets really interesting if we follow the data on visiting library websites – “the younger the better” doesn’t seem to be the rule: 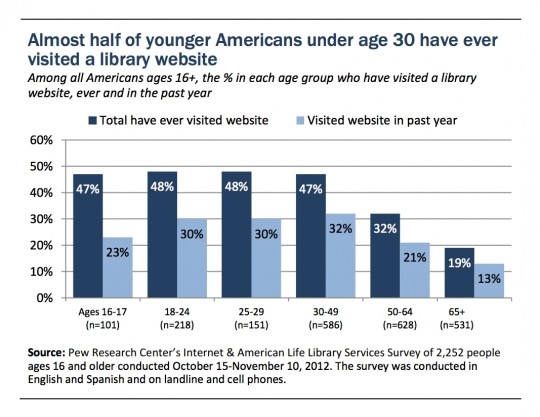 The youngest Americans are also not the heaviest users of mobile phones when it comes to visiting library websites and accessing libraries’ resources. 18% of people aged 18-49 have used a mobile phone for that purpose, compared to 16% of 16-17 year olds. 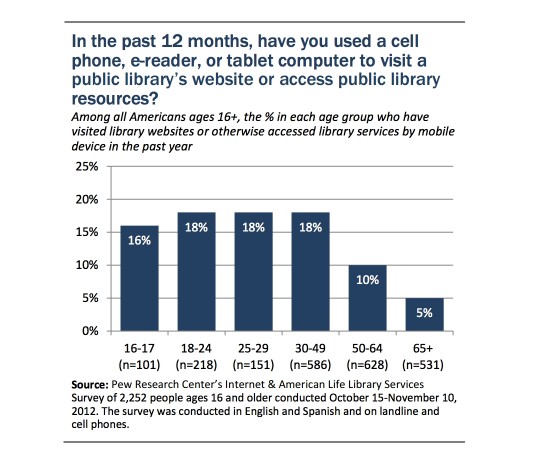 The report lists also changes in library use:

Younger Americans’ Library Habits and Expectations report is based on a Library Services Survey conducted between October 15 and November 10, 2012. You can download the full text in pdf format from here.