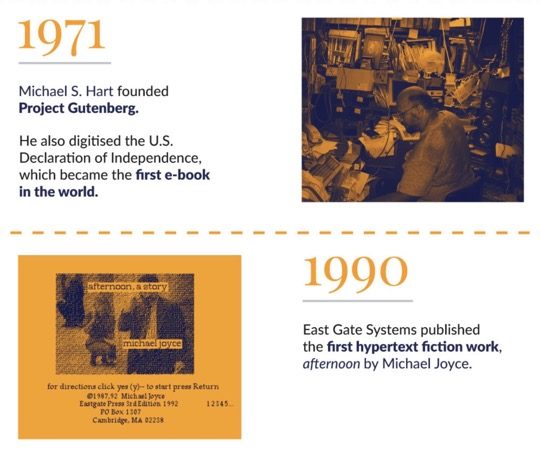 The Kindle, although being a milestone in the development of ebooks, does not mark the beginning of digital reading. It’s not even the first ebook in the world, created by Michael S. Hart in 1971.

Electric devices intended to improve reading experience were invented and conceptualized long before.

And you can see them in a new infographic created by The Curious Reader, a web magazine for readers and book lovers.

E-books have a long history with the first one being conceptualized over 80 years ago. We put together a nifty infographic to show you how e-books and e-readers have evolved over the years.

Do you want to take a detailed look at the Kindle? Make sure to check out our fresh new infographic with the timeline of Kindle devices and services.

Click or tap the visual below to see it enlarged.

Make sure to check out recent infographics about books, libraries, and reading: