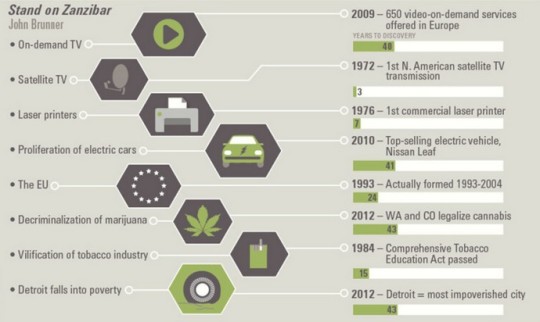 Take a look at the timeline of sci-fi books that forecast the future.

Video-on-demand services were launched 40 years after a prolific British sci-fi novelist John Brunner imagined them in Stand on Zanzibar.

Jules Verne predicted human kind would need a millennium to invent video-chatting. It actually happened 75 years after he published a visionary novel In the Year 2889. AT&T presented Picturephone at the World’s Fair in 1964.

This fantastic infographic from Printer Inks lists 24 books that predicted – and surely inspired – technology innovations we use in our daily life.

Click or tap the image to see it in full size.

Keep exploring. Here are other infographics about books and reading: