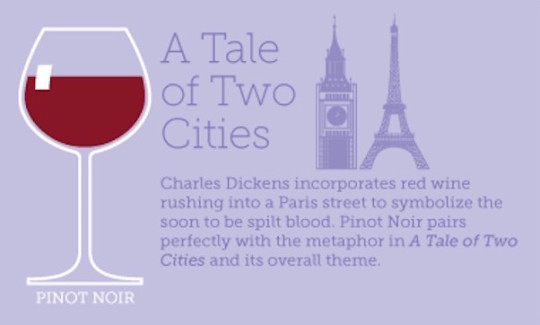 Book lovers spend most of their time with a book in one hand and a coffee or tea in another.

What about a glass of good wine?

Gone Reading, a site offering best gifts for book lovers, has prepared a visual guide to book and wine pairings. The infographic lets you better understand which classic wine goes best with which famous book.

The subtle flavors and smells of certain wines can transport an individual to the grounds of Pemberly or to the rich culture of 17th century Paris.

You can begin to re-read Jane Austen’s Pride and Prejudice with a glass of port, and “begin to unravel the sweet taste of revenge.”

The celebratory feeling champagne gives will immerse you into many extravagant parties described in The Great Gatsby.

In the infographic you’ll also find a simple guide to pair book genre with wine. For instance, drama tastes best with merlot. Science-fiction should be indulged together with sweet red wine.

Click or tap on the infographic below to see it in full resolution.