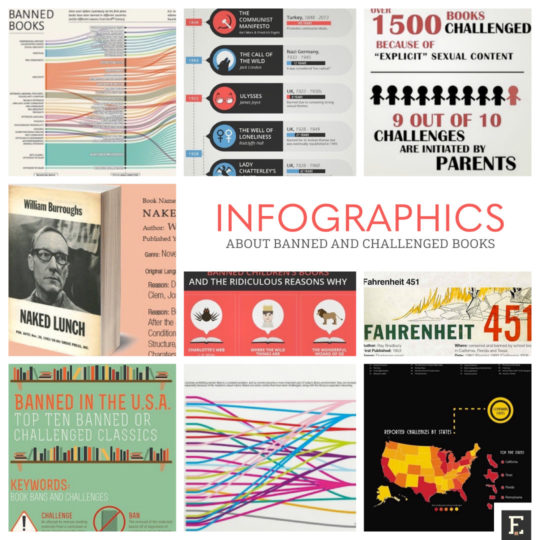 These infographics about banned and challenged books help draw attention to book censorship around the world.

Books are the best companion for everyone who wants to learn and become better – on the condition we have unrestricted access to them.

Books are banned or challenged for moral, political, religious, or commercial reasons.

Once the book is banned, readers have either limited or no access to it.

Every year, during the last week of September, a major event is held that promotes the freedom to read. Banned Books Week brings together librarians, educators, publishers, and readers who unite to draw attention to the harms of censorship.

On the website of American Library Association you can read more about Banned Books Week, find the list of frequently challenged books, download promotional materials, and report a book challenge.

Infographics play a growing role in raising the awareness about book banning. In this overview, we collected the best visuals created in the recent years.

You’ll find below the infographics from Love Reading, which are a two-volume definitive guide to most banned and challenged books.

Other infographics focus on highlighting facts and figures about book banning, not only in the U.S. but also worldwide. There are also visuals that put banned books on a historical timeline. Thanks to that you will see which books were banned – and for how long – in various countries.

Please note that this page may load slowly due to a large number of big image files. Click or tap on the infographics to see them in full resolution. 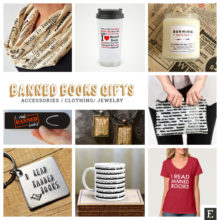 12 infographics about banned and challenged books

1. Banned and challenged books by the numbers

While most of the visuals in this overview present selected banned books, this one, prepared by  Simply Novel, gathers general facts about banned books. What’s more, these facts are up-to-date.

85% of book challenges went unreported and received no media attention. 9 out of 10 challenges were initiated by parents. Six from the top 10 books challenged in 2014 were from YA category.

The infographic also includes a list of top reasons for book challenges in 2012-2014.

Published by a UK-based book recommendation website Lovereading, the infographic lists most popular books that at some point, and in some countries, were banned.

Each book comes with a summary of the plot, the date of a first release, and most importantly – the reason to ban it.

There are books in the chart that you wouldn’t believe were banned. Just have a look at Alice in Wonderland. In the 30s of the last century, the Chinese Censor General thought attributing human intelligence to animals was “an insult to humanity”, and that children should be protected from the negative influence of the book.

The second part of the epic project by Lovereading to highlight the most banned books throughout history and across the globe.

Take a closer look: Harry Potter was banned in various states of the U.S. – for promoting witchcraft.

4. Most controversial books in the world

Books and controversies go hand in hand, and this infographic shared on Graphs.net lists the most controversial titles.

Some more facts about To Kill a Mockingbird. It’s one of the most challenged classics of all time, according to American Library Association. Reasons: racial slurs, profanity, and blunt dialog. The book still ranks at number 21 of the 100 most frequently challenged books of 2000–2009. 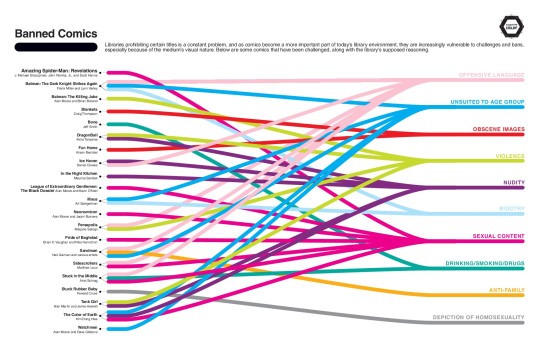 This chart shows reasons specifically provided by the libraries. Most comics were challenged for sexual content, offensive language, and violence. 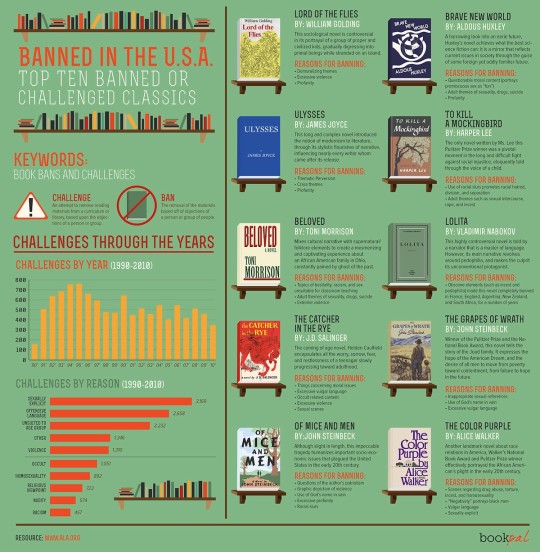 The infographic was created by BookPal, an online store offering quantity discounts on books bought in bulk.

Each of the ten books banned in the U.S. is presented comes complete with the reasons for banning it, as well as a number of challenges: by year and reason.

It’s good to observe that book banning is a downward trend. Most books were challenged in the mid-nineties. Since that time the numbers are going down.

Besides listing top banned books, this infographic, designed by Printer Inks, puts the censored books in a timeline. Thanks to that you can see when and for how long the book was banned in a particular country.

You can also find in the visual the books forbidden in schools, as well as ridiculous reasons to ban them.

8. Timeline of banned books since the 8th century 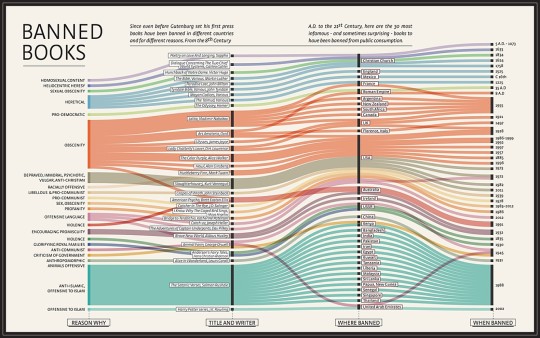 Here is another graph that shows banned books throughout history. It was designed by Giulia R. De Amicis and is a part of the infographic book published by Cassel Illustrated.

The visual is not available in a high resolution, but the trends are visible already. 30 most banned books are compared on a timeline with the reasons to ban them, the countries, and the time.

As you see, the most common reason to ban the book (the time interval is between the 8th century and today) is anti-islamic content. Obscenity and heresy follow it.

A great infographic created by Robert E. Kennedy Library. The most interesting part compares the U.S. states by the number of reported challenges. California, Texas, and Florida are the top three states.

The visual lists also top 100 banned books in the U.S. from 2000 to 2009. Each book is accompanied by the dots representing the reasons to challenge it.

10. Banned and challenged books in America

Here is an infographic that takes a closer look at book banning and challenging in the United States.

According to American Library Association, only 10% of all books that are challenged are banned in the end. A factor which makes it difficult to ban a book in America is The First Amendment to the Constitution. It prevents Congress from making any law prohibiting or abridging the freedom of speech and press.

11. Why books are banned 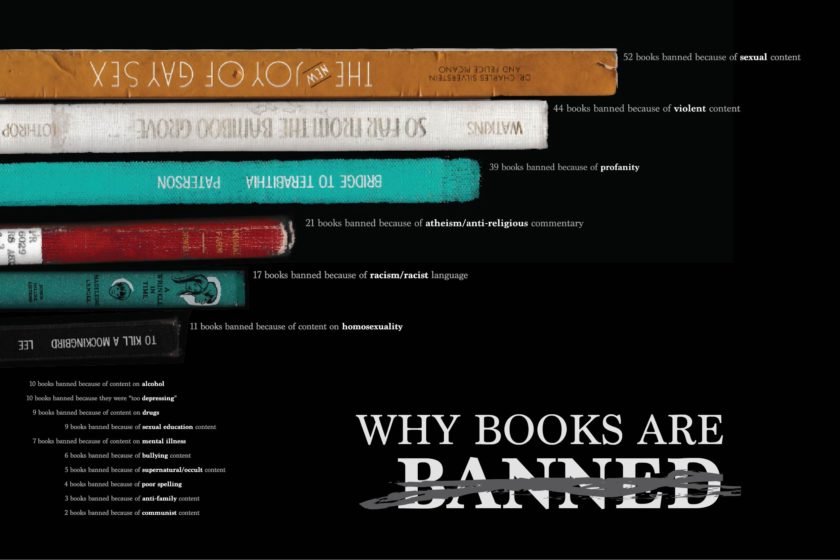 To celebrate the freedom to read, designer and illustrator Anna Weddle has created a single-minded infographic that lists the most common reasons that books are banned.

12. The most feared books of all time

The infographic lists banned and challenged books since the 15th century to present days.

You’ll find on the list classic novels, but also children’s and teen literature. The visual describes also the difference between book bannings and book challenges.