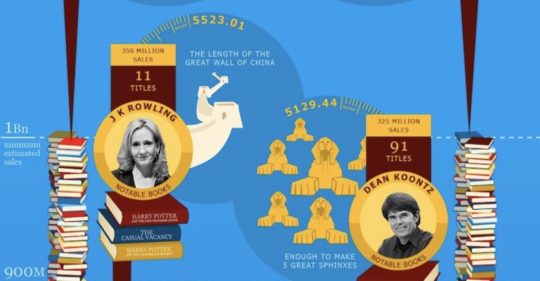 Did you know that the sales of Agatha Christie and William Shakespeare books crossed 2 billion each?

Thanks to the infographic from Love Reading and Datadial, these numbers were brought to imaginable dimensions.

If you stacked up 2 billion books, they would equal 1/7 of the way to the moon.

None of the contemporary authors reached half a billion yet. However, books by J.K. Rowling would be visible from space, forming the line as long as The Great Wall of China.

We’ve also made our own calculations, the ones that involve ebooks. If you put 2 billion books on the Kindles, and if each Kindle got 1,000 books, a pile of e-readers would reach 17.4 kilometers – a distance many people have to travel each day to work.

Here are more infographics about books and reading:

What does 2 billion book sales look like? (infographic) https://ebookfriendly.com/2-billion-book-sales-visualized-infographic/ via @ebookfriendly