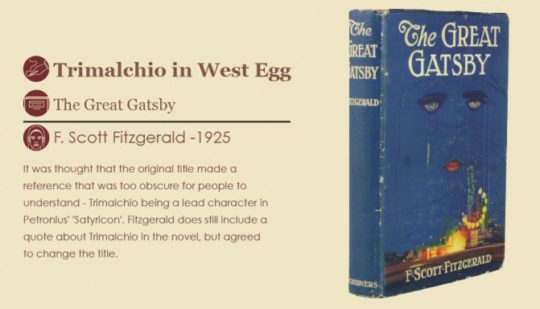 It’s true we shouldn’t judge books by their covers, but what about titles?

Would you buy The Great Gatsby, if it were entitled Trimalchio in West Egg? Or William Golding’s Lord of the Flies as Strangers from Within?

Jonkers, a rare book store in Henley-on-Thames, England, has released an infographic that lists working titles of the most famous classic novels.

A sheet for each book comes complete with an explanation why the author has changed her or his mind.

For example, William Golding’s initial title for “Lord of the Flies” was vetoed by one of his publishers who deemed “Strangers from Within” too absurd.