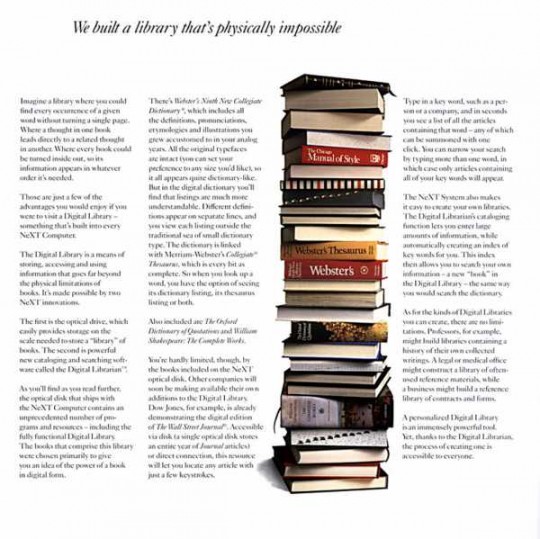 Finally, iBooks app comes to Mac. It will become a part of Apple’s OS X Mavericks this autumn. One may ask “why did it took so long?” Steve Jobs was dreaming about books on a computer disc long time ago. He actually made it happen 25 years ago – but not with Apple.

When in 1988 NeXT, a company founded by Jobs, released their workstation computer, something called Digital Library was built into it. I’ve found an original brochure (here and here). On page 16 we read more about Digital Library and Digital Librarian. Looks like a copy for the upcoming iBooks Mac release was already written.

Imagine a library where you could find every occurrence of a given word without turning a single page. Where a thought in one book leads directly to a related thought in another. Where every book could be turned inside out, so its information appears in whatever order it’s needed.

The Digital Library is a means of storing, accessing and using information that goes far beyond the physical limitations of books.

As for the kinds of Digital Libraries you can create, there are no limitations.  Professors, for example, might build libraries containing a history of their own collected writings.  A legal or medical office might construct a library of often used reference materials, while a business might build a reference library of contracts and forms.

A personalized Digital Library is an immensely powerful tool. Yet, thanks to the Digital Librarian, the process of creating one is accessible to everyone.

“We built a library that’s physically impossible.” Apple? No, NeXT – in 1988 https://ebookfriendly.com/we-built-a-library-thats-physically-impossible-apple-no-next-in-1988/ via @ebookfriendly