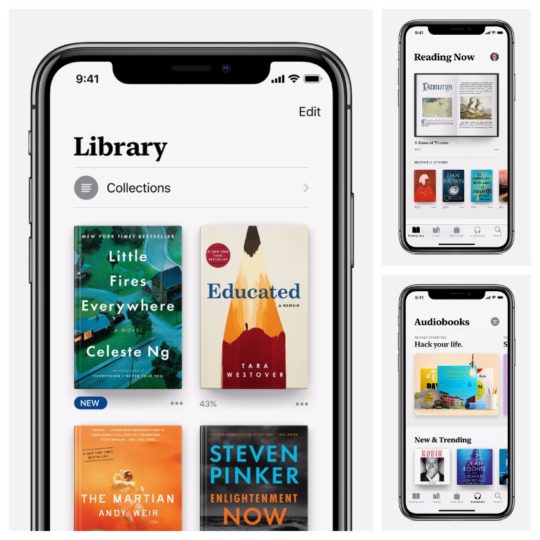 The big update of the iBooks app is coming together with iOS 12. It may roll out to users as soon as on September 12.

An Apple Keynote will take place on September 12, 2018, where new iPhone, iPad Pro, and Apple Watch models will be released. During the event, Apple is also expected to announce the release date of iOS 12.

iOS 11 was rolled out for users the same day last year’s iPhone models were revealed – during the Apple event on September 19, 2017. Therefore, there are quite big chances iPad and iPhone users could download the newest operating system starting September 12, 2018.

iOS 12 was announced on June 4, during the 2018 Worldwide Developers Conference. The new system will offer many new features and improvements, naming only the Measure app, greatly improved Apple Maps, or CarPlay support for third-party navigation apps.

What I’m most excited about, however, is the wholly redesigned iBooks book and audiobook app. The change is significant – Apple tends to say “replace” rather “update.” The app will now be called “Apple Books” instead of iBooks.

According to Eddy Cue, Apple’s senior vice president of Internet Software & Services, the new app is the company’s biggest improvement of the books ecosystem.

Apple Books will inspire a love of reading — it puts a world of books and audiobooks right at your fingertips, whether you want to dive into your favorite story for a couple of minutes or a few hours.

The design of Apple Books follows the trend set up by the Music app and then iOS 11, with big bold headlines, images with rounded corners, and bolder icons. There is one exception, though – the leading typeface is serif, not sans – which seems much more suited for the book-related interface.

The home page, called Reading Now, puts together books and audiobooks the user is currently reading. From here, it’s easy to jump to the store section, where you can buy new titles.

Just a reminder that Apple Books is the only book and audiobook app for iPhone and iPad with complete in-app purchase capability. It should make it the first choice for many iOS users, but so far, Apple was not trying hard enough to use this advantage. Maybe this time they will succeed.

The app is among a few iOS apps that enable users to enjoy both books and audiobooks. The new update will make audiobooks more important and easier to reach, featuring a dedicated Audiobooks tab.

My biggest question regarding Apple’s efforts to improve the books part of their ecosystem: will audiobooks become available in more countries with the release of iOS 12 and Books app?

How to watch Apple’s 12 September event?

If you are excited to see new iPhone and iPad Pro models, together with new features of iOS 12, mark Wednesday, September 12, 2018, in your calendar.

You can watch the event live on Apple website. If you experience playback issues (it happens when you have slow connection), you can always follow live updates on leading tech blogs:

More about iPad and iPhone”

Get ready for the entirely redesigned Apple books app https://ebookfriendly.com/ibooks-apple-books-app-update-ios-12-fall-2018/ via @ebookfriendly