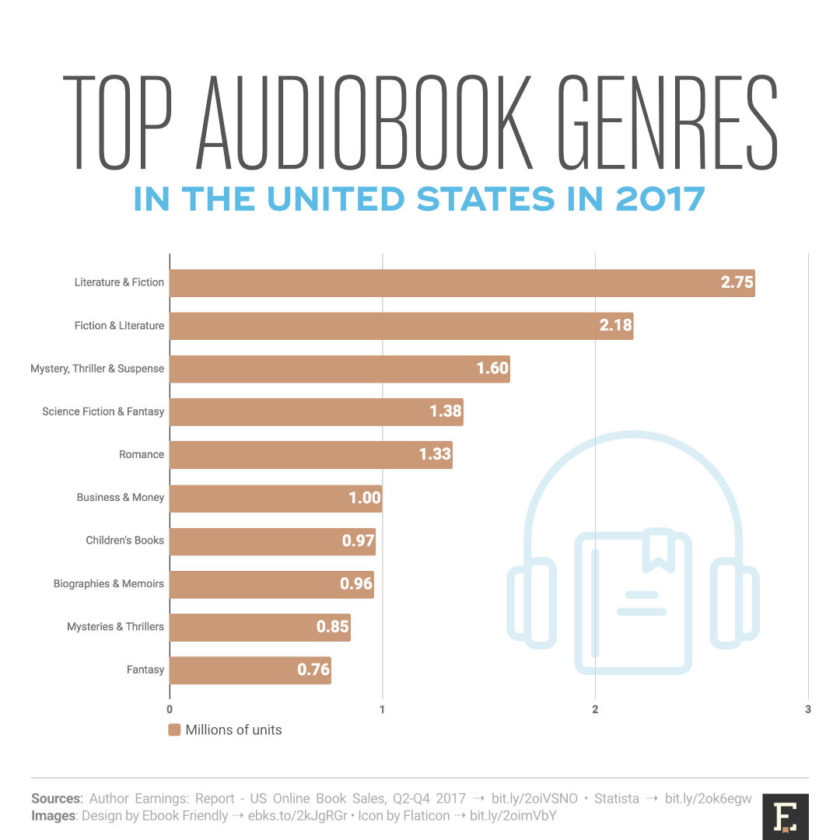 Do you think self-help, biography or business books are what audiobook lovers are most interested in? Let’s compare it with the report by Author Earnings.

Statista has just released highlights from a report by Author Earnings, taking a closer look at most popular audiobooks bought in the United States from the second to fourth quarter of 2017.

The chart lists genres, not particular titles. It gives a general idea which genres are better-suited for audiobook format than the others.

When you take a closer look at the list, you will realize some of the categories are repeated, for instance, “literature & fiction” and “fiction & literature.” Nevertheless, it’s worth looking at the figures. They give an idea of how many audiobooks are being sold in the United States.

Two first places on the list are occupied by a genre widely considered as literary fiction. When combined, the total number of units sold is reaching 5 million (and it’s for Q2-Q4 of 2017 only).

The next group in the ranking, with 1.6 million units sold, is mystery, thrillers, and suspense. Science fiction & fantasy category comes next (almost 1.4 million).

When you are looking at Audible bestsellers, you’ll see that business or self-help books take top places. The report from Author Earnings shows a different story. These categories are further down the ranking: business & money occupies the 7th position.

Top audiobook genres in the United States in 2017 (chart) https://ebookfriendly.com/top-audiobook-genres-us-2017-chart/ via @ebookfriendly