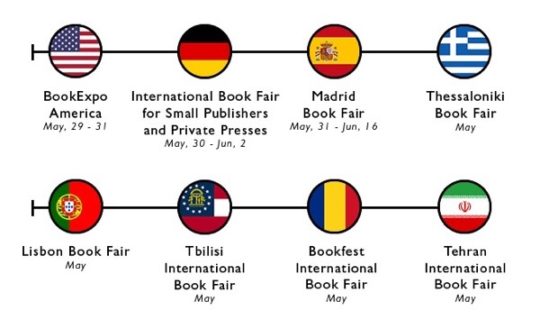 This timeline of the major book fairs around the world should be a part of the 2019 literary calendar of book industry professionals and book addicts.

Prepared by Kotobee, a platform that lets authors publish interactive ebooks for Android, iOS, and web, the infographic lists major international book fairs, together with information when their 2019 editions take place.

In the original post on Kotobee blog, you will also find detailed information about the events and links to their official websites.

Nothing warms a book lover’s heart more than a good book. And nothing excites a book addict more than a book fair, overflowing with publishers and booksellers.

Click or tap the infographic to see in enlarged.

Via TMBA Corbett Tries to Write.

More infographics about books and libraries: