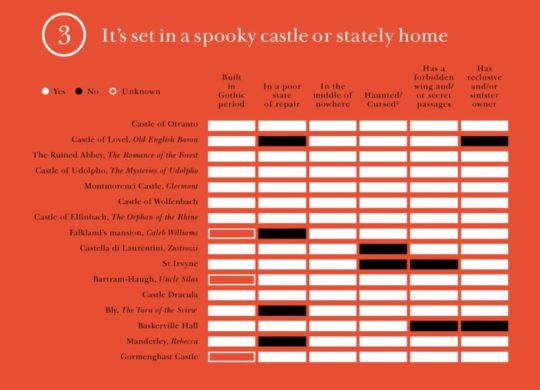 It’s usually quite easy to spot a gothic novel. The action should take place in old days, the location should be a spooky castle, and the weather should be far from being wonderful.

Adam Frost and Zhenia Vasiliev have prepared for The Guardian an infographic that lists also some less obvious signs of the gothic novel.

When Horace Walpole published his ‘gothic story’ The Castle of Otranto, he launched a literary movement which has sired monsters, unleashed lightning and put damsels in distress for 250 years. A horde of sub-genres has followed, from southern gothic to gothic SF, but are some novels more gothic than others?

Via Information Is Beautiful.

Check out more infographics about books, libraries, and reading:

10 signs you are reading a gothic novel (infographic) https://ebookfriendly.com/signs-reading-a-gothic-novel-infographic/ via @ebookfriendly