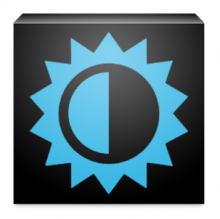 There are two problems with tablet displays:

I mostly use the tablet at home, and mostly during evenings, so the latter issue becomes a pre-nightmare, especially when you want to read a book in a night mode.

Some book-reading apps (like the December update of Google Play Books) allow extra dimming, but using a special app will let you lower the brightness in general.

I’ve tested a couple of apps, and decided to go with Screen Dimmer. The app puts a color layer over the display. This is the way to reduce brightness, but it’s not the only thing it does.

There are three features that make it über-useful: 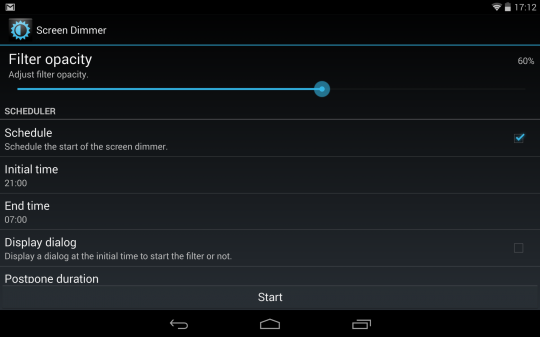 You can set up when the app should start working (put an extra dim on your device’s display). With this up you can also turn on a silent mode (in pro version).

What’s very useful, you can use a “schedule with the sun” pro feature. The app will automatically start and stop at the time of the sunset and sunrise.

There are many ways to adjust the levels (the most important one is listed below in a separate section). There are also several ways to control the app’s settings.

One is, obviously, opening the app itself. There is also a widget (1×1 to 1×4) which lets turn on extra dimming and adjust transparency.

For me, the best option is to let the app send a notification every time it starts running on schedule. From a notification center you can adjust the level of transparency, so there is no reason to have a widget sitting on the screen all the time.

Most importantly, the app does what f.lux does to computers: it lets change color warmth of the screen. It’s natural to have a warmer light of your tablet’s display to match an indoor lighting.

As I said, Screen Dimmer put an extra color layer over the screen. It’s up to you which filter color you choose. For evening reading the best colors are: red, yellow, orange, or brown. You can also set up a custom color, as well. 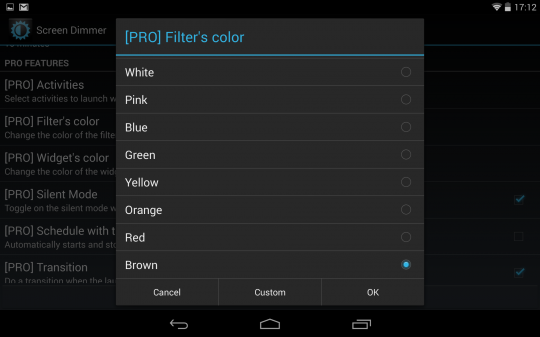 The result is seen in a screenshot below. This is a night theme in Google Play Books. Filter color in Screen Dimmer is set to brown. On a computer it may seem too dark, but believe me, it’s a perfect light for night owls. 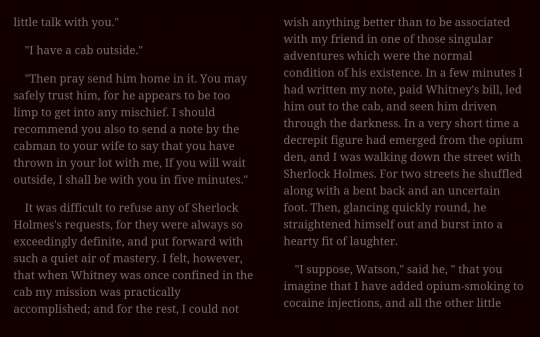 Night reading on Android made easy with Screen Dimmer app https://ebookfriendly.com/screen-dimmer-reading-on-android/ via @ebookfriendly