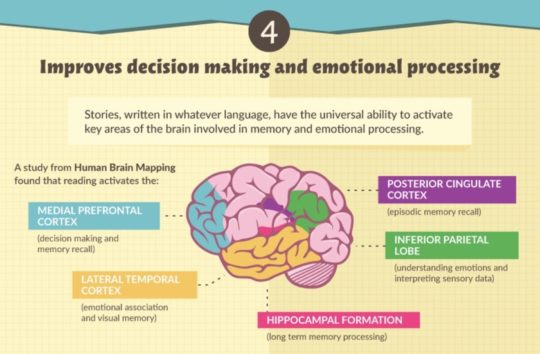 Did you know that the brain retains activity for as much as five days after reading a book?

A major reason for not reading books is not having enough time. Are there any other? Can you think of anything that would prove reading is not good for you? For your health, brain, mood, personal development?

On the other side, there are so many reasons to pick up a book. When you are reading, you stimulate areas in your brain responsible for emotion, empathy, or decision-making.

From Global English Editing, a professional editing and proofreading service specializing in academic and business writing, comes a new infographic that puts books in focus. Some time ago, we shared another infographic that proves reading can make you live longer.

This time, the team has gathered facts that show reading can help you build a better brain. When you skim through the headings, you may think: Ah, I know it all. Wait. Read the copy, and you will learn some new facts about how reading helps get smarter.

One of the most fascinating studies quoted in the infographic is the one conducted at Emory University using fMRI. Scientists have found out that the brain retains activity for as much as five days after reading a book!

This “shadow activity” is similar to muscle building. Days after the activity, increases in connectivity were found in the leftangular/supramarginal gyri and right posterior temporal gyri, which are areas associated with comprehension.