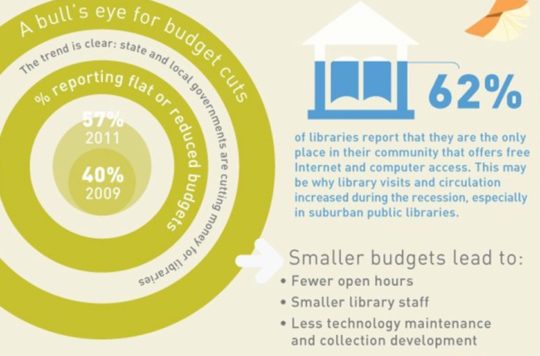 Libraries adapt to new reality much better than anyone could think. The key to winning in the digital times is engaging communities. And realizing that libraries are not only about lending books.

Created for City Town Info, the infographic presented below puts together the facts that influence the evolution of public libraries in times when everything turns digital with a touch of a magic wand.

62% of libraries report that they are the only place in their community that offers free internet access.

Combine it with facts from the Pew Internet report: almost 80% of Americans agree that free computer and internet access are very important services that libraries offer. It clearly shows the path to follow.

Cherylin Winkler wrote a post for State Tech (it’s actually the place where we found the infographic), in which she shares very insightful thoughts:

The reality is that technology will be the saving grace of the public library system. Public libraries continue to be the primary source of computer access and continuing education for underserved members of the community.

Without these resources, the digital divide will only increase and imperil the success of every community.

How could libraries adapt to evolving needs? Engaging patrons through social media, and acquiring books in digital format, are definitely worth implementing.

Keep exploring. Here are more infographics about books and libraries:

How are public libraries cherished in the digital age (infographic) https://ebookfriendly.com/public-libraries-in-the-digital-age/ via @ebookfriendly