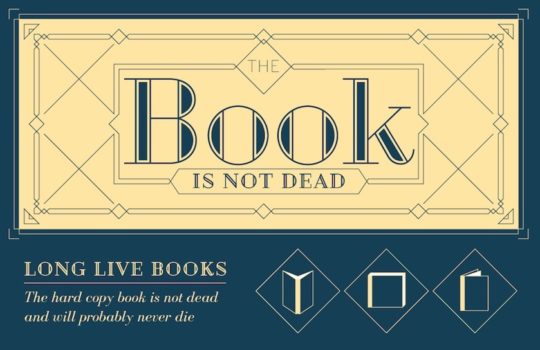 It’s pretty obvious that ebook in a form we know it today will die sooner than print book.

However, in the flood of infographics documenting the growth of ebooks, it’s easy to get an impression that times of the Gutenberg-era books are over.

There is nothing further from the truth than that. Print books will evolve, and struggle in the digital era, but they will never die.

Ebook adoption was very fast two years ago, but now it’s slowing down. Increase in ebook sales was 154% in 2011, but only 33% a year later. It will be even smaller – much smaller – this year.

Books in electronic form will have to struggle for readers’ attention as much as books in printed form.

This, and other interesting facts, are included in a new infographic created by License Direct, a company that provides a search for over 20 million registered US professionals.

E-book sales will probably plateau, at least in the medium term, at around 25% of total sales. Many e-book sales will not cannibalize physical book sales, and so publishers will overall be selling more than before.