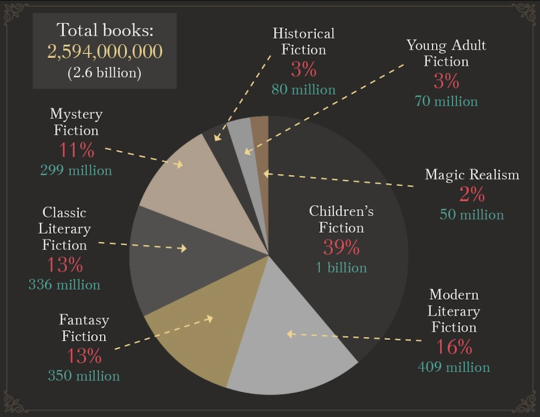 The new infographic not only lists best-selling books of all time, but also estimates sales in most popular book genres.

We’ve seen already the infographics collecting best-selling books of all time (we list them later in the post).

When it comes to single titles, the job is quite simple. Bringing the comparison to a more general level, is much harder, but would eventually give some hints on which book genres make the most money.

The new infographic, designed by UK-based creative search agency Mediaworks for Furniture UK, does just that.

It may seem inaccurate, and you might question the split of titles between genres, but the chart is definitely worth analyzing.

Every module includes info about a specific book, complete with extra figures, and approximate number of copies sold. Then, the sales figures are summed up to bring the total number in a specific genre.

Obviously, the chart doesn’t include all categories. Non-fiction is not listed here. Most popular books of all time are grouped into eight genres:

What you may have already suspected, the most popular book genre is children’s books. When we add YA books, it already takes over 40% of all sales. According to the infographic, over 1 billion copies were sold!

Other infographics and lists of most popular books through history:

We hope the infographics made on the topic so far will inspire good people around to further explore the topic and come up with similarly great visuals.

Click or tap on the image below to see it in full resolution.

Most popular book genres of all time (infographic) https://ebookfriendly.com/most-popular-book-genres-infographic/ via @ebookfriendly