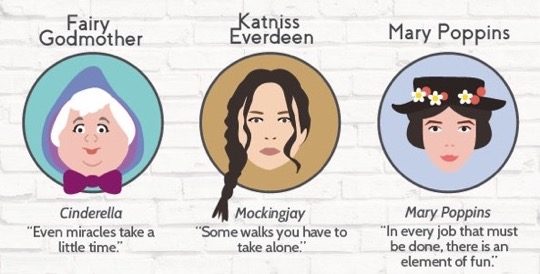 From Mary Poppins to Wonder Woman, these characters from books and comics will inspire you to change for the better.

From Playground Equipment comes a new infographic that puts together the most outstanding quotes from the world of fiction.

After visuals presenting passages from fictional teachers and superheroes, it’s time to delve into the most inspiring thoughts shared by fictional female characters from books, comic books, and Disney movies.

Read these short, empowering, thought-provoking quotes by Mary Poppins, Hazel Grace Lancaster, Lady Galadriel, or Elizabeth Bennet. You’ll get inspired, and maybe you will start thinking about how to change your attitude, find positive energy, and improve your life.

Female superheroes like Wonder Woman are finally getting the recognition they deserve, showing that strength, independence, and conviction are admirable traits in women and society as a whole.

The infographic presents a wide spectrum of thoughts – about life, change, strength, and love. They are both inspiring and witty!

Looking for infographics about books and libraries? We’ve got them!