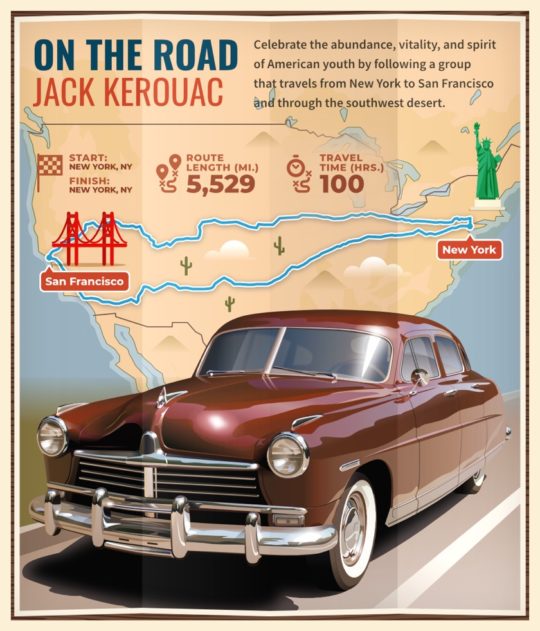 A new visual recreates six routes to some of the most infamous literary road trips across America.

On the Road by Jack Kerouac is just the beginning of the great adventure with favorite books, endless roads, freedom of choice, and excitement of the unknown.

While Kerouac’s novel inspired thousands of people to travel along the most famous route from New York to San Francisco, there are other, equally exciting, literary routes you can discover.

The team from Car Rentals has created an infographic that takes a closer look at routes described in famous books, and tries to recreate them.

Besides On the Road, you will find here Fear and Loathing in Las Vegas by Hunter S. Thompson, Tom Wolfe’s The Electric Kool-Aid Acid Test, and The Lost Continent by Bill Bryson.

Each route includes the start and destination location, length, as well as travel time. If you visit the original post on Car Rentals Blog, you will also find links to Google Maps custom maps that follow the narrative of the books.

A turn-by-turn guide to literary road trips across America (infographic) https://ebookfriendly.com/literary-road-trips-america-guide-infographic/ via @ebookfriendly