With the introduction of iPad Pro 2017 models, Apple has released a new top-shelf accessory – a slick sleeve made of the genuine leather.

Leather Sleeve is designed to fit iPad Pro models launched in 2017. It’s made of the premium-quality leather and has the interior lined with microfiber to protect against scratches.

The most prominent feature of the Leather Sleeve is that it includes a special holder for Apple Pencil – an accessory that can be used exclusively with iPad Pro tablets.

It leaves, therefore, you with a question: do I need to buy the iPad case and Apple Pencil case separately, if I could have them combined into one accessory?

Leather Sleeve for iPad Pro is available in four colors: Saddle Brown, Taupe, Black, and Midnight Blue. Based on availability, the sleeve – despite its price – is quite popular among customers who shop in the Apple online store. While Midnight Blue or Black versions ship in one business day, you’ll have to wait at least one week for Saddle Brown. 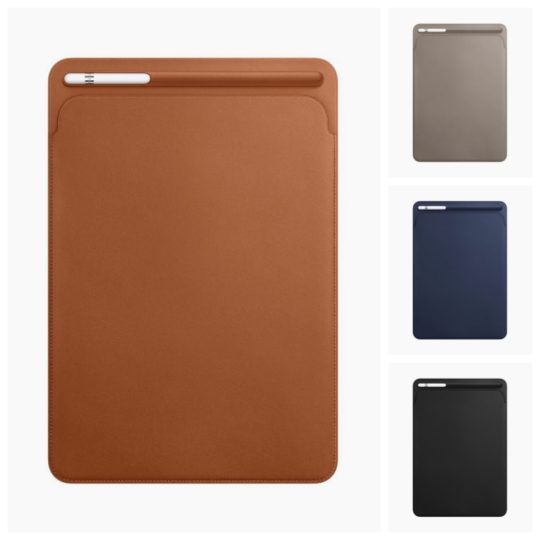 When it comes to compatibility, there is also a version for the first-generation iPad Pro 12.9. So far, there is no sign of the Leather Sleeve for the 9.7-inch iPad Pro.

The new original accessory from Apple is costly. The version that fits iPad Pro 10.5 is $129. As it makes sense to get it only if you are planning to buy Apple Pencil (if you don’t have one, already), the total cost to add to your new iPad Pro is around $230.

Is the new sleeve something you’ll ever consider buying?

A case as beautifully designed as iPad itself, the iPad Pro Leather Sleeve is made from top-quality leather.

It protects your iPad with a soft microfiber lining and stores your Apple Pencil, so you always have it with you.