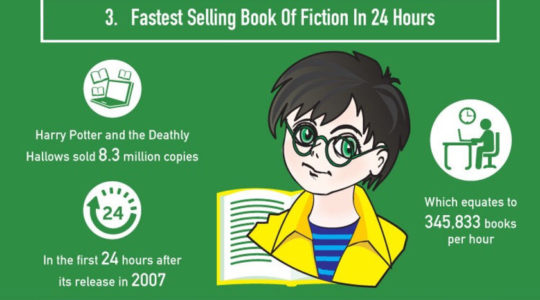 This World Book Day infographic is a handy list of Guinness World Records that involve books.

You probably know, or at least can guess with a big chance of the right answer, which book sold most copies in the first 24 hours after the release.

Other book-related achievements are less known, but it doesn’t mean they are less stunning.

Do you know who the youngest person to write a published book is? Or where the highest library in the world is, and on which floor?

You’ll find these facts in the Guinness Book of Records. You can also take a shortcut and explore an infographic that puts together eight impressive records that are related to reading, books, and libraries.

The infographic was created to celebrate World Book Day, and released by Tickled Pink, a UK online store offering the widest range of fancy dresses, including the ones inspired by literary characters.

Are you looking for infographics about books and reading? We’ve got more: