Goodreads network is a hilarious source of information about reading habits of the largest book-loving community on the web.

Recently, the Goodreads team have prepared an extremely interesting presentation for Tools of Change publishing conference. The report, devoted to book discovery and usage, is the outcome of a very innovative approach. Instead of inviting everybody to take part in a survey, Goodreads asked only the recent readers of two popular titles: Gone Girl by Gillian Flynn, and The Night Circus by Erin Morgenstern.

The report, worth analyzing from a first to last slide, is available on Slideshare and it’s also embedded at the end of the post. I am a huge enthusiast of reading ebooks on mobile phones – and the presentation reveals some very interesting facts. It’s great to see that as much as 37% of the Goodreads survey respondents read ebooks on their cell phones. 13% said that their mobile phone is the only device they use to read ebooks. It’s a lot, considering the fact that for many readers, cell phones are a secondary, or emergency, reading device.

Below I’ve visualized the split between situations when users reach for a mobile phone to read ebooks. When do you use your cell phone to read? 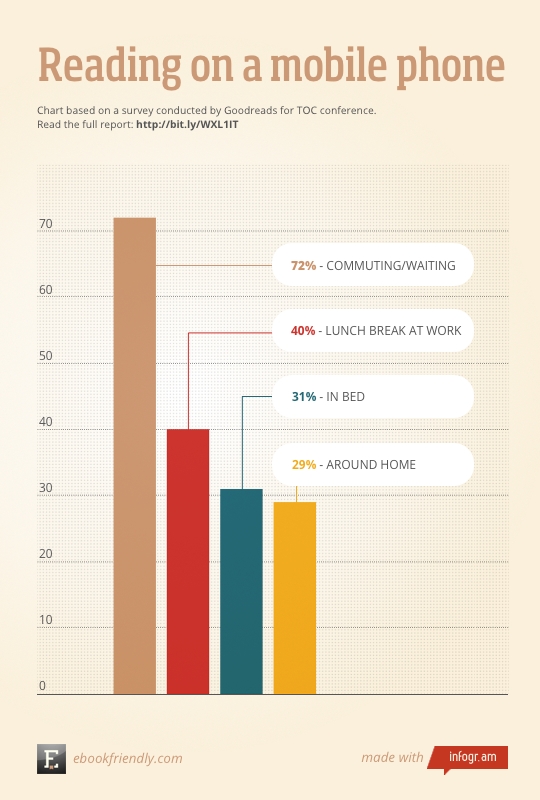 Goodreads survey: 37% of users read books on their mobile phones https://ebookfriendly.com/goodreads-survey-37-of-users-read-books-on-their-mobile-phones/ via @ebookfriendly