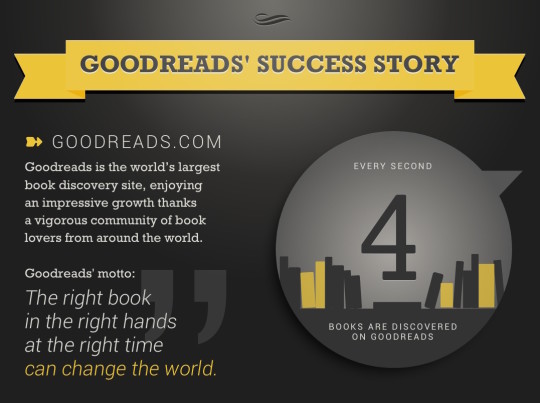 This infographic is intended to mirror the condition of Goodreads at the time of glory – and on the edge of losing independence.

I designed this chart as a tribute to one of the most successful book sites on this planet – the sites that have power to keep people close to books and reading. The Goodreads team had, and I hope will have, the energy to inspire millions to deepen love for books by joining fellow lovers of written word. In fact, Goodreads’ vibrant community is its strongest part.

Quite frankly, I’m not sure if it’s gonna end well for the community of Goodreads. Amazon bought the site to have full control over it. Ask yourself a question: if you were Amazon, wouldn’t you like that community to move to your own site? For Amazon they are not book lovers. They are book buyers. Now, if they would do the same on Amazon’s website – write reviews, add books to wish lists, take part in discussions –  they will become just buyers, as Amazon offers books and everything else.

Maybe I’m too pessimistic. Maybe. When collecting data for this chart I was not able to find any info about Shelfari. No number of users, no number of books collected. Nothing. Typical Amazon policy. The most precise numbers are “thousands” and “millions”. So, when I compared monthly traffic (for US, via Quantcast) it appeared, that Shelfari has no more than 60 thousand monthly visitors – almost 200 times less than Goodreads! Where is the Shelfari community, the site that was bought by Amazon for $1 million in 2008?

I’m not sure about Goodreads’ future, maybe in a couple of years I will create an infographic “Gooddeal’s success story”. Anyway, these six years were fantastic for the site and its users.

Feel free to share this image on your site (Creative Commons license). Get the embed code from below: