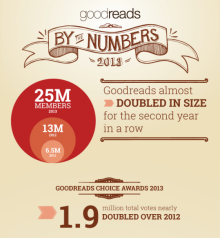 Goodreads has just released an annual infographic showing the biggest milestones for the past year.

Obviously, the most interesting thing to find out is how the most popular book recommendation site was influenced by Amazon acquisition.

First of all, the sheer fact this infographic was made says Goodreads saved most of its independence. The site was always winning on being transparent to their users, and this essential merit is still there.

So, instead of a vague “millions of new users”, which is typical for the online retail giant, we learn about 12 million new users. Now the site is proud to have 25 million users, almost twice as much as at the end of 2012, and four times more than in 2011.

However, when we analyze other figures, we can quickly find out that users were much less active than a year before.

Only one-third more books were added to Goodreads shelves in 2013, compared to 2012. Also, with a user base growing so fast in the last 12 months, there could be much more new book reviews than 9 million.

I suppose the number of new users had to do something with Goodreads / Kindle integration. When the book recommendation service was integrated into Kindle Paperwhite and then Kindle Fire, anyone logging in using Amazon account could have been automatically counted as a new Goodreads user.

Other thing to keep in mind is that besides Amazon, there are two other options to sign up: via Twitter and Google.

One thing is clear for me, that unlike Shelfari, Goodreads is turning Amazon’s involvement into more benefits than disadvantages, naming only big names joining the site last year (Stephen King and Chuck Palahniuk, among others).

What to you think about Goodreads’ development in 2013? Are you still actively using the site?

Goodreads by the numbers 2013

Goodreads by the numbers 2012

Goodreads in 2013 – how much was it influenced by Amazon? (infographics) https://ebookfriendly.com/goodreads-amazon-2013-infographics/ via @ebookfriendly