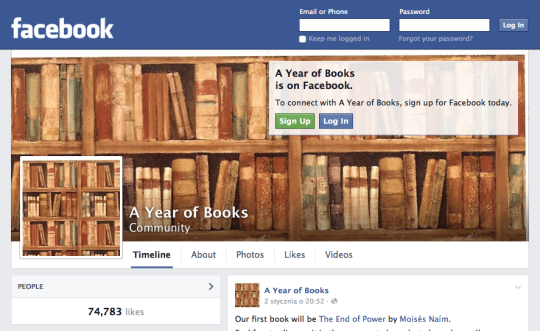 Facebook starts a special community page, in an attempt to encourage users to read more books.

Mark Zuckerberg, the founder of Facebook, has shared his New Year resolution. His challenge for 2015 will be to read a new book every week. He’s going to focus on learning about different cultures, beliefs, histories and, obviously, technologies.

He wrote he’s excited about the new challenge, and finds it intellectually fulfilling, but one thing is especially worth stressing. He claims:

Books allow you to fully explore a topic and immerse yourself in a deeper way than most media today.

There are many 52-book challenges like the one started by Mark Zuckerberg. One thing is special though – the fact that is was initiated by the service that is probably the single biggest factor drawing people away from books.

Many people spend (or waste) on Facebook precious time they could devote to learn more from books. Now Facebook wants to fix this, and we should at least appreciate it.

Following founder’s statement, Facebook created a special page, A Year of Books, where a new book will be shared every two weeks, open for discussions. A first title is The End of Power by Moisés Naím, exploring how the power that usually was held by governments and militaries, is now shifting to individuals.

It’s not Facebook’s first initiative to draw the attention of their users to books. Last summer, the the action inviting Facebookers to list 10 books that had had stayed with them in some way was extremely popular and resulted in announcing Top 100 books loved by Facebook users.

Are you going to join Facebook reading challenge? It’s on my New Year resolutions list every year, but I’ve just liked A Year of Books page to keep track of what books are picked by Mark Zuckerberg to read.

Facebook wants us to read more books in 2015 https://ebookfriendly.com/facebook-year-of-books-2015/ via @ebookfriendly