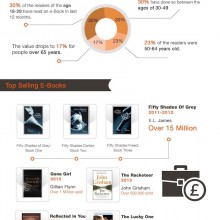 Ebook sales are slowing down in matured markets. This is what we’ve observed all over 2013 in US, but the infographic presented below shows interesting data from UK as well.

The chart was created by James Whiting for Sainsbury’s Ebooks. It compares facts and figures from both US and UK, but also lists what made the growth rate slow down.

Prices of devices are going down, as well as prices of ebooks. In UK, which usually has most expensive ebooks, the average price has fallen from £5.44 in 2009 to £3.60 last year.

Obviously, less advanced markets, Germany, France or Italy among them, will see the growing ebook sales in the years to come.

US and UK ebook markets are slowing down (infographic) https://ebookfriendly.com/ebook-markets-slowing-infographic/ via @ebookfriendly