While library stats in the US are highly optimistic, the situation is clearly different in the United Kingdom, and the entire European Union.

CILIP, Chartered Institute of Library and Information Professionals, is supporting Right to E-Read campaign to help public libraries to be able to lend ebooks free of charge to the public.

The infographic presented below shows that as much as 85% of ebooks are not available to UK public libraries. What’s more, out of the six major trade publishers in the UK only three offer some of their ebooks to libraries.

This situation is an effect of a current European copyright law, according to which the publishers do not need to license libraries to lend ebooks at all.

Please, help spread the word, and sign the petition for The Right to E-Read on Change.org.

Give users the right to e-read by legalizing the lending of e-books by libraries!

65.000 libraries and their 100 million users call upon the EU to develop a clear copyright law that enables libraries to fulfill their enduring mission into 21st century of providing all EU citizens with access to the riches of human knowledge whether in the library, offsite or online. 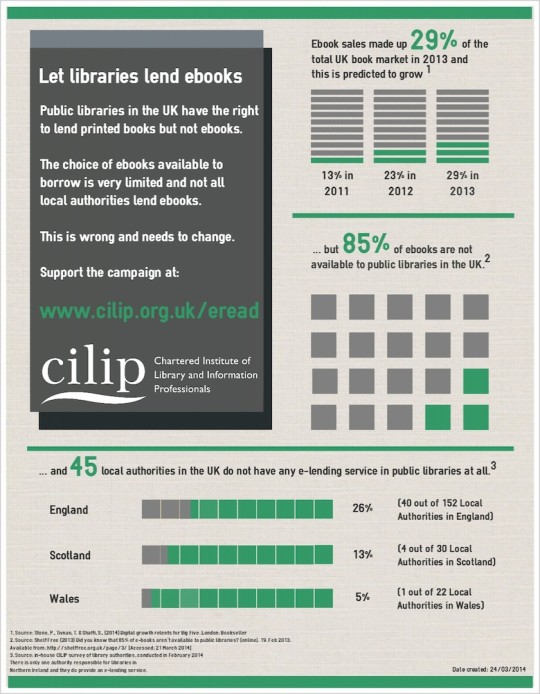 85% of ebooks are not available to public libraries in the UK (infographic) https://ebookfriendly.com/85-of-ebooks-are-not-available-to-public-libraries-in-the-uk-infographic/ via @ebookfriendly