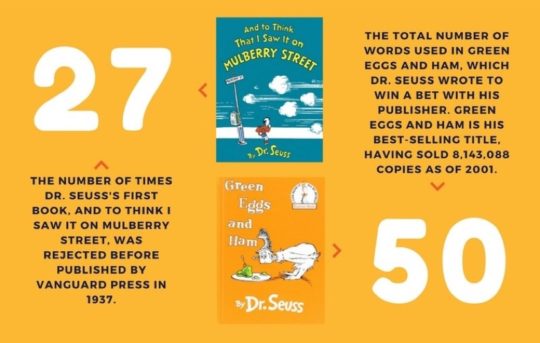 Did you know Dr. Seuss’s first book was rejected 27 times? Or that he never had any children of his own? These and other facts are included in the infographic below.

When it looks like the day will be sad and stressful, try to spend a minute on bringing back the happiest moments of your childhood.

Suddenly, everything may look more positive and less complicated. Most certainly, one doctor was involved in getting your great mood back.

Theodor Seuss Geisel – Dr. Seuss – is the doctor of the happy childhood of millions of kids around the globe.

Today, one in four American children receive a Dr. Seuss book as their first book. Green Eggs and Ham is his most popular book. First published in 1960, it has sold over 8 million copies worldwide.

This and other interesting facts about Dr. Seuss you will find in an infographic created by Olivia Bender for Review Bounce. The accompanying post brings more facts and anecdotes.

Did you know Dr. Seuss’ first book he wrote and illustrated, And to Think I Saw it on Mulberry Street, had been rejected 27 times before it was published in 1937 by Vanguard Press?

Keep exploring. Here are other infographics related to books, author, and libraries:

The facts in the hat – Dr. Seuss by the numbers (infographic) https://ebookfriendly.com/dr-seuss-numbers-facts-infographic/ via @ebookfriendly