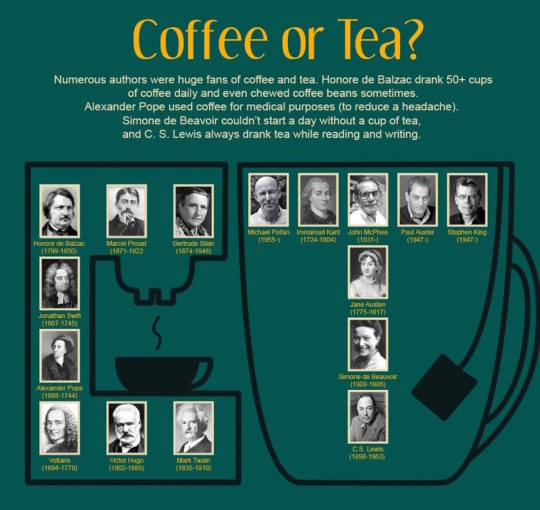 What time did famous authors write? What were their favorite drinks and pets? Were they writing fast or slow? Find the answers in the infographic below.

Following daily routines of the most successful writers might not be the most effective way to write a bestseller. Still, it’s always interesting to find out how extraordinary people lived.

The team from an online writing service Bid for Papers have prepared an infographic that investigates the daily habits of over 100 authors, including the most famous ones.

Opposite to earlier infographics, which focused on productivity or writing hours, the one from Bid for Papers is more versatile. It’s split in five parts where authors are attached to one of the two groups:

There are also several fun facts included in the infographic. For instance, do you know Honoré de Balzac used to drink no less than 50 cups of coffee a day?

What’s most interesting, however, is the information that’s not included in the visual. Unlike other infographics, this one comes with an extended article on Bid for Papers blog that provides the scientific explanation for writers’ daily habits.

The article also includes a list of weird habits many authors had. William Faulkner typed with his toes having shoes on his hands. Friedrich Schiller was keeping a box with rotten apples under the table. Victor Hugo used to write naked.

Daily habits of over 100 famous authors (infographic) https://ebookfriendly.com/daily-habits-famous-authors-infographic/ via @ebookfriendly