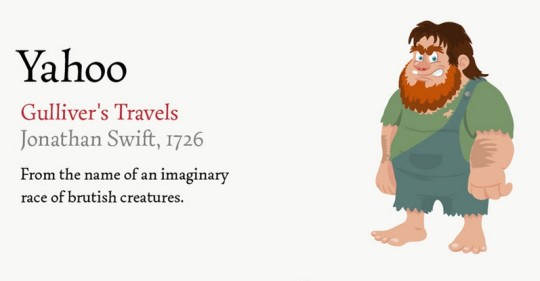 Did you know that words “robot,” “nerd,” “cyberspace,” or “freelance” were invented by authors?

Take a look at the infographic released by Love Reading, a UK-based book discovery site. It will let you learn the literary origins of popular English words.

Some words are known to come from literature, naming only “catch-22”. Some others are quite a discovery.

The word “debunk,” describing false claims, was used by William E. Woodward in 1923.

There were freelancers at the beginning of 19th century – thanks to Sir Walter Scott and his historical novel Ivanhoe.

I’m sure majority of Yahoo users don’t know the origin of the site’s name. A Yahoo was a legendary being in Gulliver’s Travels by Jonathan Swift, published in 1726.

The most interesting, however, is the word that is a sign of our times. Robot. The word was originally used to describe a humanoid character in a 1921 science fiction play R.U.R. (Rossum’s Universal Robots) by a Czech writer Karel Čapek.

The visual was designed by Data Dial digital agency. Click or tap the image to see it in full glory.

Here are more infographics to explore:

15 words you never knew were first used in books (infographic) https://ebookfriendly.com/commons-words-from-books-infographic/ via @ebookfriendly